It has been 70 years since Indian last had an all-new Scout. At Sturgis Motorcycle Rally, in the USA, Indian revealed the new motorcycle. The 2015 Scout, like the Chief is going to boast a liquid-cooled V-twin and with prices starting at USD 10,999 (Rs 6.7 lakh approximately), it isn't a very expensive cruiser either. It sets up the brand to widen its reach - Indian Motorcycles has just started out in India, but in the USA, they're already at 3 per cent of the market. 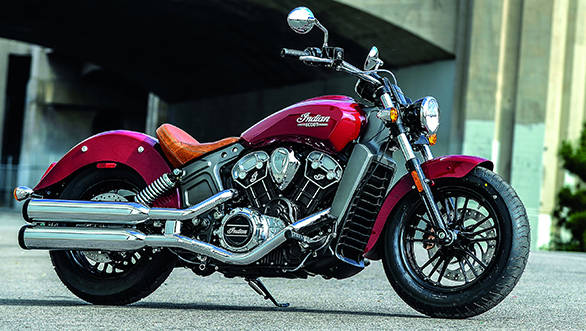 The Scout is all new, says the company with a relatively light wet weight of 253kg. For reference, the Indian Chief line for instance weighs around 380kg. Indian is billing this as a middleweight cruiser but with extraordinary power for the segment. The frame is a rigid cast aluminium job - it's new though the material is the same as the Chief. The all-new 1,133cc V-twin boasts closed-loop fuel injection, liquid cooling as well as four-valve DOHC heads. The engine claims to put out 100PS. But get this, peak power is at 8,100rpm so a slow or low-revving twin this isn't going to be. Peak torque is 98-odd Nm which is delivered at 5,900rpm, also not as low as most cruisers. Seat height is often a talking point on cruisers and at 25.3 inches, the Scout has a very low seat which should help riders of all sizes and skill - a broad swathe of appeal is critical to success in the middleweight cruiser segment.

In terms of design, the Scout is nothing like the retro Chiefs and doesn't really play by the traditional cruiser rule book either. The proportions and masses are more taut and sculpted and we hear the bike looks even more amazing in the flesh. That said, we aren't fans of how slab sided and heavy the rear fender looks in the images. Note the inclined twin-shocks they form as part of the 'rigid triangle' design that's a direct link to how the old Scout used to look. Part of the design work is some very involved lines cast into the engine cases which make the motor look unique.

Sitting on a 1,562mm wheelbase, the Scout is long but not as long as many cruisers. Combined with 135mm of ground clearance, it should give the bike very good ground clearance in corners. Chances are you'll lean quite some way over before things start grinding out, giving further credence, even if numerical at this point, to the performance prospect of the Scout. Indian further says that low and high speed agility is excellent which means we simply cannot wait to get into that amazing looking tan leather single seat in the press images.

Indian USA is taking orders for the 2015 model in gloss black and red as well as matte black and silver colours with the bike set to arrive at dealers towards the end of 2014. We also expect the Scout to go on sale in India shortly though the company is yet to confirm pricing or launch plans. But if Indian has a second line of motorcycles on sale here in India around the Rs 15-17 lakh mark, we believe the choice in the cruiser market would only make things so exciting.