Exotic supercar manufacturers have been clocking some serious numbers in terms of production, in addition to their track records. Last week we told you about the 100th Bugatti Chiron and this week it is Mclaren Automotive. The British sports car manufacturer has rolled out the 15,000th car after being in production for seven years.

McLaren states that the milestone was achieved in less than 18 months after the manufacture of the 10,000th car, that demonstrates the growth of the brand in customer demand and manufacturing operations. The 15,000th car rolled out of the McLaren Production Centre (MPC) in Woking, Surrey was a 570S Spider in Curacao Blue from the company's Sports Series. 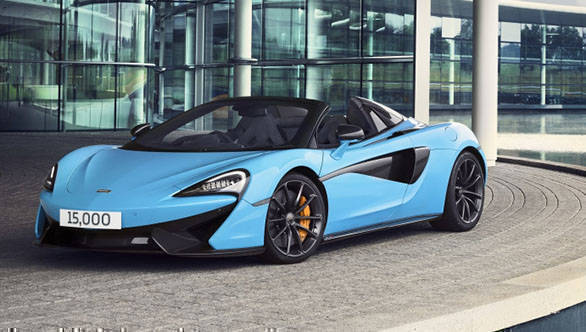 To meet the rising global demand, McLaren added a second production shift in 2016. This led to an increase in production from 10 cars a day to 20, with over 90 per cent of vehicles built in Woking exported to more than 30 markets around the world.

McLaren set a new record in 2017 with a sales of 3,340 cars. The rise in sales was triggered by the launch of two new offerings, the 570S Spider within the Sports Series and the 720S within the Super Series. Two-thirds of sales in 2017 came from the Sports Series and one-third from the Super Series. The company also launched the McLaren Senna in 2017, a 800PS/800Nm hypercar named after after Brazilian F1 legend and personal hero Ayrton Senna. The production of the limited edition 500 models will be completed shortly.