Sebastian Vettel has taken his fourth world championship title with a win at the 2013 Indian Grand Prix. The German driver has now won his fourth world championship on the trot. The win at the Indian GP is also his third consecutive win at the circuit. Celebrating his championship title Vettel came onto the start finish straight at the Buddh International Circuit and did a few donuts in his Red Bull, before parking it right there. He proceeded to climb out the car, and then bow down in front of it, before rushing towards the crowds and throwing his gloves to them. As he crossed the chequered flag, though, it was these words that greeted Vettel over the radio "Fantastic, you're a four-time world champion. You've joined the greats!" 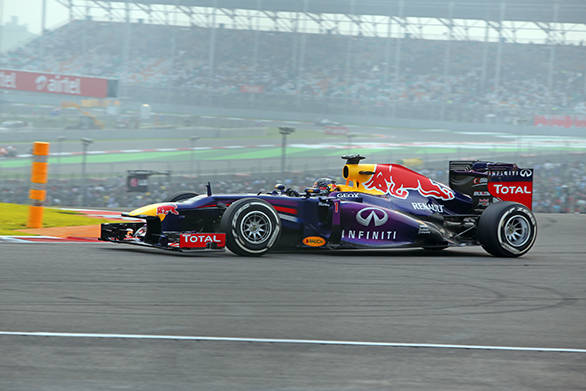 Going into the weekend of the Indian Grand Prix, there was little doubt that Seb Vettel would take victory here, and along with it the title as well. Vettel topped all three practice sessions, set the fastest time in qualifying too. It was all he could to ensure that he'd take the win in India. Of course, tyre strategy was set to be key at the BIC, given that Vettel was starting on the soft compound tyres. It was expected that he'd pit within the first five laps. What happened, however,was that Vettel pitted after the first lap of the race.

Meanwhile, at race start, Felipe Massa had managed to get past the two Mercedes cars and it was the Ferrari that led the pack for a bit, before the second Red Bull of Mark Webber took over the lead. The stunner of the first few laps, however, was Romain Grosjean who moved up from 17th to sixth place. Webber eventually pitted on the eleventh lap, he found himself come out ahead of McLaren driver Sergio Perez. Vettel was running in third. Soon, though, on Lap 22, Vettel made it past Perez and got into second place. He proceeded to put in competitive laps, slowly chipping away at Webber's lead.

As the race wore on, though, it was Webber who continued to lead the race. On Lap 31, Vettel pitted, and it came out still behind his team-mate Webber. It looked for all intents and purposes as though it would be Aussie Grit who would win the race. Things didn't turn out quite like that though. Nearly 10 laps later Webber pulled into retirement with a gearbox sync failure. The Red Bull team radioed a message to Vettel saying "Mark's stopped at the track," to which Seb replied saying "I am aware." Vettel then took over at the head of the race, leaving the men behind him to spar. Nico Rosberg was running in second, while Romain Grosjean took over third place from team-mate Kimi Raikkonen. And that is where they finished - Sebastian Vettel first, Nico Rosberg second and Romain Grosjean third.