Ford has introduced a facelift of its popular Endeavour SUV in India at a starting price of Rs 19.83 lakh ex-Delhi. Changes in the facelifted model include reworked headlamps, grille, fog lamp bezels as also bumper skid plate. Ford says that the passenger side mirror now has blind spot detection and gives a higher visibility to the driver. The 16-inch alloy wheels also have a new design. Inside the cabin there is an updated SATNAV entertainment system with Bluetooth audio control. To make parking the big SUV easy, Ford have also added a reverse camera. 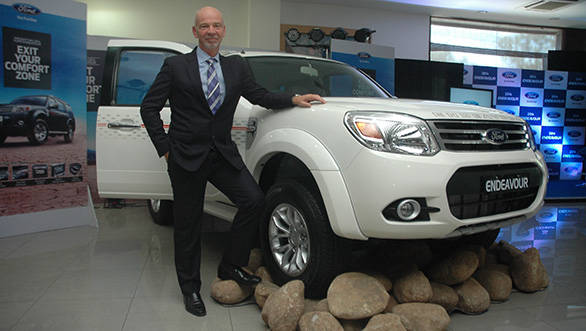 Nigel Harris with the new Ford

Powering the Endeavour is the tried and tested 156PS 3.0-litre diesel engine which makes 380Nm of torque. The company claims a fuel efficiency of 10.68kmpl from this engine. Ford also sells the Endeavour with a 2.5-litre 143PS/330Nm engine which has a claimed fuel efficiency of 12.67kmpl. The company is offering the new Endeavour in three variants- the 2.5l engine SUV is available only with a manual box and two-wheel drive while the 3.0l comes with an autobox and in 4x2 (Rs 21.28 lakh) and 4x4 (Rs 23.06 lakh) configurations. Both the auto variants also get cruise control.

"The 2014 Ford Endeavour is for enthusiasts who are outgoing, adventurous and believe in exiting their comfort zones to take the road less travelled, yet never compromise on their comfort. This is an extremely capable machine, and we are confident it'll add to the appeal of our trusted nameplate," Nigel Harris, president of Ford India said.