Toyota is always quick to launch limited or exclusive editions of its cars every time the festive season hits India. The first from the lot is the Toyota Innova Limited Edition. It comes in the Gx grade with an exclusive Bronze Mica Metallic (that's Toyota-speak for this sparkling chocolate tint) colour on offer while the car is also available in the regular silver. Updates to the exterior include the Limited Edition emblem at the rear, body graphics as well as chrome accents on the front and rear lamps. There is a seven as well as an eight seater limited edition model available with Euro III and Euro IV engines. 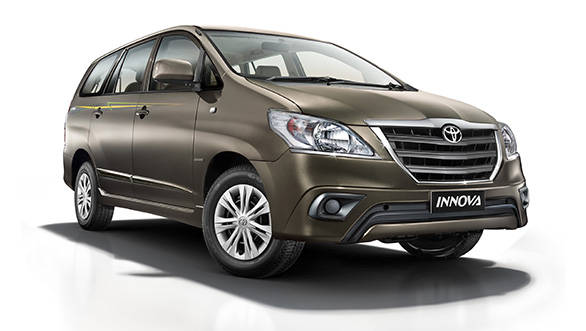 Inside, there is a touchscreen DVD system complete with Bluetooth, USB and aux-in compatibility- operated via a remote. There are dual-tone fabric seats and colour coordinated door trims as well.

With the limited edition, owners will get driver airbag and ABS as safety features. The 2014 Toyota Innova Limited Edition is priced at Rs 12.90 -13.00 lakh ex-Delhi. Currently it is being sold in select cities only. At other places, a limited edition accessory package is on sale. Only 1,500 units will be developed and be made available by November.

N Raja, senior vice president and director (sales and marketing), Toyota Kirloskar Motor Pvt. Ltd. said, "Innova is one of our flagship products and has undisputedly been the leader in the MPV segment since its launch in 2005. The Innova has been rated first in quality every year ever since its launch in India. It has been our constant endeavor to continuously upgrade our flagship offering inline with the changing lifestyle preferences of our customers."