Rising fuel prices and emphasis on efficiency has compelled car companies world over to take a new direction towards designing and manufacturing their cars. BMW is showing no hesitation in moving to that direction either, with the introduction of the 2 Series Active Tourer.

The car will come equipped with front wheel drive lay out and new light weight and efficient, turbocharged three and four cylinder engines in the transverse layout, a very popular configuration among small cars to liberate more space inside the cabin. Despite all this, the 2 Series Active Tourer car will have sporty intent, a famous BMW trait. 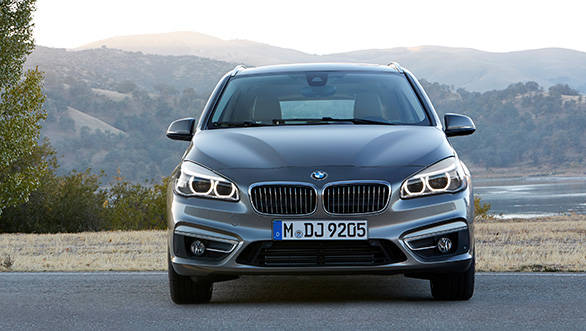 The BMW 218i Active Tourer is powered by the all new 3-cylinder engine. It is a part of the new modular family, is light weight, with high performance and fuel efficiency. This petrol also gets BMW's Twin Power turbo and ultra low friction technologies. As a result it develops 136 PS and 220Nm of torque, zooms from 0-100kmph time in 9.3 seconds, has a top speed 200kmph and fuel efficiency of 24.5kmpl.  The residue produced as a result is just 115g/km of carbon dioxide. All the figures are of course claimed by the company. 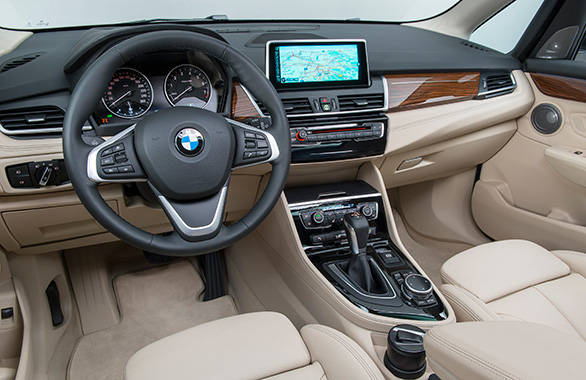 The second in the new line-up, the BMW 218d, has a 4-cylinder oil burner. It is a common-rail direct-injected to 2000 bar turbocharged unit and has friction reduction technologies. This engine produces 150PS and 330Nm of torque. It dispatches the 0-100kmph time in 8.9 seconds with a top speed of 205kmph and has a lofty fuel efficiency of 29.3kmpl. The emission as a result stands at just 109g/km of carbon dioxide.

Though these figures are not official yet, clearly, the diesel looks the favourite both in terms of performance and efficiency. 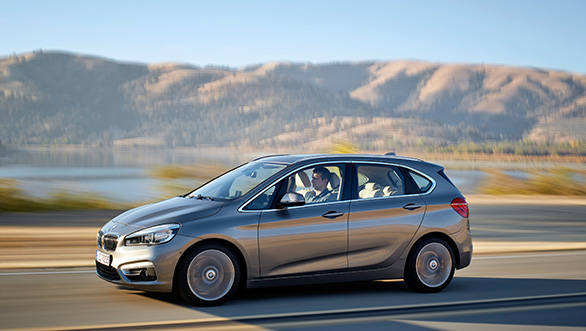 The standard transmission on offer is a newly developed six speed manual unit. The three cylinder pot can also be mated to a six-speed automatic.

For the four cylinder diesel, a new eight-speed automatic has been developed, and it's designed to account for the front wheel drive and transverse engine configuration. The car is packed with BMW EfficientDynamics and BMW ConnectedDrive to enhance its driving experience.

The car is designed to be incredibly versatile; in-cabin space is large with high seating position which comfortably accommodates five passengers. For the first time, BMW has introduced the front wheel drive. They have developed it starting from a clean sheet of paper. This layout is said to strike a fine balance between comfort and agility, and also preserve the sporty characteristics which are built around all the BMW cars.

The price of the car is expected to start from less than Rs 24lakh.