Lewis Hamilton has had a rather good weekend at Montreal. The double Formula 1 world champion notched his 44th pole position at the Circuit Gilles Villeneuve on Saturday, his fourth pole at Canada. He translated this fourth pole into a fourth win at that very circuit, leading from lights to flag, never putting a wheel wrong. Hamilton crossed the chequered flag ahead of Mercedes AMG F1 team-mate, Nico Rosberg. Third place went to Williams driver Valtteri Bottas who took his first podium of 2015, and his seventh career podium in Formula 1. 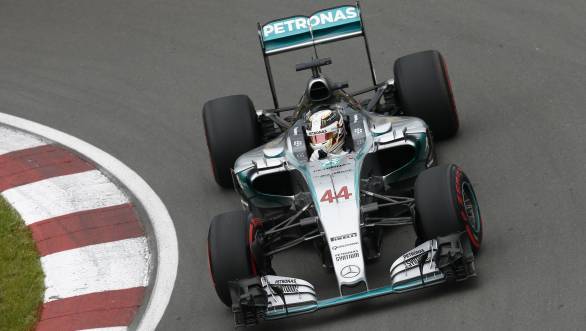 When the five red lights went out at Montreal, Hamilton got off to a good start. It looked for a little while like Ferrari driver Kimi Raikkonen might just be able to squeeze through into second place, but that didn't happen, with the Iceman slipping back to third. Rosberg managed to stay second all through the race, but unfortunately wasn't really able threaten his team-mate. On the podium, though, Rosberg described the race as "fair game", something that team bosses Toto Wolff and Niki Lauda must have been relieved about.

While Kimi Raikkonen did look set to take Ferrari to third place on the podium, a mistake after his pitstop caused a spin, costing him track position. This allowed Williams driver Bottas to move into third place and stay there for the rest of the race.

Raikkonen finished fourth, with his Ferrari team-mate Sebastian Vettel finishing a fine fifth place, having started eighteenth on the grid after a dismal qualifying performance, made worse by a grid penalty for overtaking under red flags during practice.