Mercedes has revealed the successor to the highly successful SLS AMG GT3 racecar in the new AMG GT3. The new car is visually based on the new AMG GT but features extensive aerodynamic bodywork which results in a menacing look. As you'd expect, most of the bodywork is constructed in lightweight carbon-fibre while the chassis is an aluminium space just like the road car which helps keep weight down. 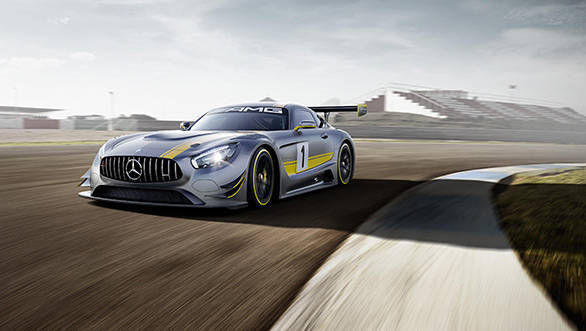 Unlike the road car, AMG has chosen to stick with natural aspiration, which means the big but free revving 6.3-litre AMG V8 for the old SLS AMG GT3 continues under the hood. The motor features dry sump lubrication and is mated to an AMG race spec six-speed sequential gearbox.

Air management is key for a racecar both in terms of cooling and also downforce. Hence the multiple fins, gills, slats and that giant intake in the bonnet. The body is also significantly wider while the rear has a giant diffuser and an even bigger rear wing.

The AMG GT3 will be built at AMG's Affalterbach plant and be available for purchase by race teams by the end of 2015.