John McGuinness is something else entirely! And we're right pleased about that too. The Morecambe Missile has gone and notched his 23rd win at the Isle of Man, emerging victorious in a thrilling Senior TT. McGuinness clocked speeds of well over 132mph, and kept a hard charging James Hillier at bay to win the most gruelling road race there is. Finishing third was Ian Hutchinson. 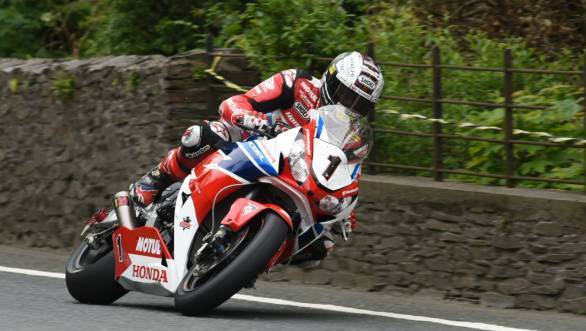 When the Senior TT kicked off, though, it wasn't McGuinness who was at the head of the pack. In fact he was trying hard to keep up with the rest, until the race was red flagged after James Hamilton's crash. Once the race was restarted, though, it was good old John running away at the head of it all. And there wasn't anything that anyone could do to catch him. Hutchy himself dropped his pace, having made an error on the second lap. This meant that Hillier was able to up his pace and steal second place in the Senior TT.

What does McGuinness' win mean for Isle of Man fans? Well, quite simply, it means that he is just three TT wins shy of breaking Joey Dunlop's record of 26 wins at Douglas.

In the Lightweight TT, Ivan Lintin took his first ever TT victory, winning from James Hillier by just under four seconds. Michael Rutter finished third. Both Lintin and Hillier smashed the old lap record, with Hillier lapping at 120.848, compared with 120.845 for Lintin.