Mahindra Adventure driver Gaurav Gill has won the 2015 Rally of Maharashtra in Nashik. The multiple champion set the fastest time at the end of each day and trounced the competition on his way to yet another win in the Rally of Maharashtra. With no one to challenge the commanding lead he had built over the last couple of days, Gill drove cautiously but fast during the final two SSS stages. 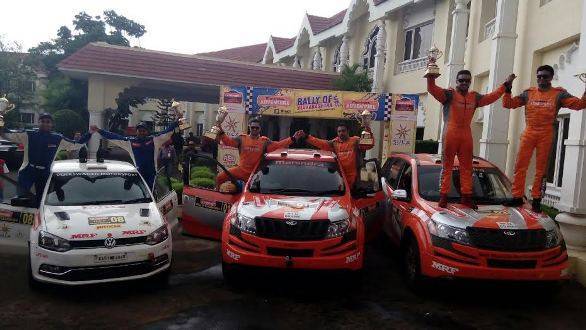 The battle for second, however, was intense as the gap between Arjun Rao Aroor and Amit rajit Ghosh had reduced after yesterday's first SSS stage.

Today, the duo fought for the podium fiercely. Aroor's Volkswagen Polo R2 was clearly faster on the tight SSS stage while Ghosh's Mahindra Super XUV was slower by over six seconds. After the first SSS round, Aroor was tied with Ghosh and by the final round , Ghosh was relegated to third.

It is interesting to see that the Polo R2 is posing a formidable threat to the mighty Super XUV in the Indian Rally Championship. Mahindra, in fact, is bringing in a host of upgrades to the next rally.

Dean Mascarenhas, stood first in the IRC 1600 Class. One of the fastest youngsters in the Rally, Dean made a superb comeback after losing 10 seconds in a minor crash during the first SSS stage.