Mercedes-Benz has announced that the diesel variant of the W205 C-Class, the C 220 CDI, is now being produced locally at its plant in Chakan, near Pune, Maharashtra. The C 220 CDI joins its petrol sibling, the C 200, which entered local production on February 11, 2015. Mercedes-Benz says that the W205 C-Class has achieved a localisation of up to 60 per cent. 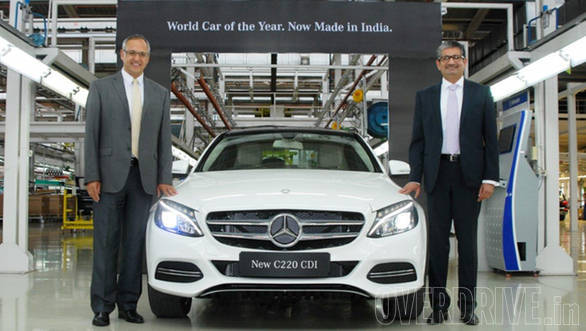 Mechanically, the car remains unchanged, so you still get the 2.2-litre four-cylinder oiler that churns out 170PS of power and 400Nm of torque. But as expected, the locally-produced model loses out on some equipment like the ambient lighting and lit doorsill scuff plates. The design of the alloy wheel has been changed too, but the size remains unchanged. Safety tech on the locally produced Mercedes-Benz C 220 CDI includes seven airbags, attention assist, tyre pressure monitoring system, Hill Start Assist, ESP, ASR, BAS, ABS and the German carmaker's Pre-Safe function.