The S-Class coupe was coming for sure after Mercedes showcased the concept at the 2013 Frankfurt motor show. The official unveiling which will take place on March 6 at the Geneva Auto Show will be followed by the launch expected sometime in September this year. The price has not yet been disclosed. 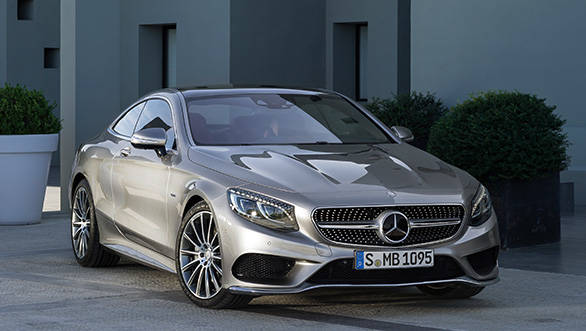 The exterior of the S-Class coupe is pleasing to look at with smooth, harmonious and elegant flowing lines that impart a visual appeal that only long coupes like this one can have. The bonnet is long and has a declining profile which culminates at the dominant front grille. The head lamps get full LED treatment with daytime running lamps at the top. A special edition will have unique headlamps with 47 Swarovski crystals. From the side the dome shaped roofline without the B-pillar gives the car good all round visibility. The large wheels, prominent wheel arches and wide rear profile all seamlessly work together to lend an aggressive stance. The rear gets sleek, elongated tail lights  two exhaust pipes at both end and the three pointed star right in the middle of the trunk, which can pivot outwards to locate the rearview and surround view camera. The coupe is 5029 mm long, 1905 mm wide and 1422 mm tall.

The wheelbase is lengthy for a coupe at 2946 mm. The interiors are packed with features as is expected since it shares platform with the S-Class sedan. The interiors are borrowed from the S-Class with the addition of Bengal red leather, saddle brown and porcelain colour options. The audio comes from standard Burmester surround sound system with the optional Burmester 3D surround system taking the listening experience to a whole new level. Head up display is another optional feature which comes in handy because it displays information directly in the driver's field of vision allowing him to focus on the road. The information displayed contains vehicle speed, navigation instructions and driving assistance system messages. 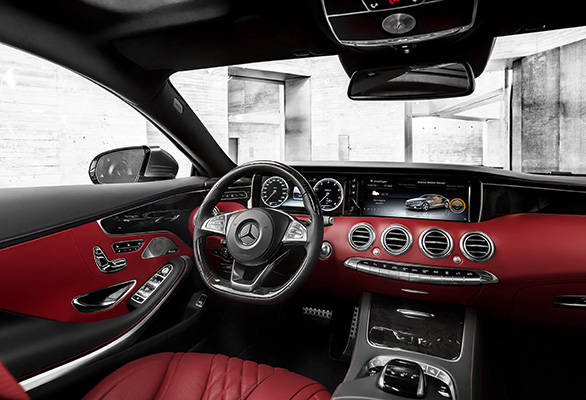 The interiors are borrowed from the S-Class with the addition of Bengal red leather, saddle brown and porcelain colour options

A new feature which debuts with the S-Class coupe is "active curve tilting" function. What this does is that it makes the car lean before going in to a corner thereby reducing lateral acceleration on the occupants. Active curve tilting works in tandem with active body control. The suspension struts are equipped with hydraulic cylinders called plungers and they work to adjust the force in each strut individually. A stereo camera located behind the windscreen monitors the road and detects curve up till 49 feet. This system can tilt the angle of the car by 2.5 degrees and is active between the range of 30 -180 kmph.

The S-Class coupe will be powered by a 4.7 litre, twin turbocharged V8 engine which produces 455PS of power and an eye popping 699Nm of torque. Transmission duties are handled by a seven speed automatic. The sportiness is amplified by the exhaust systems which have pneumatically controlled flaps that can be opened and closed depending on the engine speed leading to a fuller, sportier sound.

The only model on offer will be the S550 coupe 4MATIC that will be launched this fall in the U.S, a convertible version is also expected to be launched soon after.