It wasn't the sort of race we were expecting at Aragon. No, not after Marc Marquez set a new lap record during qualifying at the Spanish track on Saturday. And certainly not with the Repsol Honda rider starting Sunday's race on pole. As it would turn out, on the second lap of the race, at Turn 12, Marquez would go down into the gravel while chasing race leader Jorge Lorenzo, the Honda pit crew would bury their heads in their hands in dismay, and the fans would be livid. Later, the Repsol Honda rider would take full responsibility for the crash and would apologise to the Honda team and fans alike.

But it was the other Spaniards on track who would really impress at Aragon. Jorge Lorenzo really needed a win in order to keep his chances at the championship alive. And when he took the lead at Aragon, running away at the head of the pack, it was clear that he had his mind set on the 2015 title. Victory would mean he would cut down Rossi's lead in the championship, and Lorenzo did exactly that. It was a lights-to-flag affair. 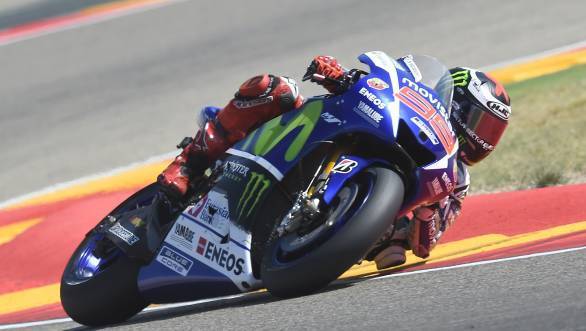 Behind him, the second Repsol Honda, with Dani Pedrosa astride it, was trying to catch up to Lorenzo as much as possible. More importantly perhaps, Pedrosa was defending his position from Valentino Rossi. Rossi would have liked to reduce the dent in his title efforts, by moving into second place, but Pedrosa would not give way. The two traded places several times, with a particularly inspired last lap move from Rossi, but there was no getting past the Spaniard. Pedrosa, who'd had surgery earlier in the season to fix arm pump issues, rode his best race of 2015. Rossi would have to settle for third.

Rossi currently heads the championship with 263 points, while Lorenzo has 249 points as MotoGP heads to Japan in two weeks' time.