Those fearless men are back on their machines, suited up, helmets strapped on and eyes set on the 2015 MotoGP world champion title. The pre-season testing at Malaysia's Sepang International Circuit turned out to be quite an interesting prelude to another exciting season. Pre-season tests brings to the fore, all the hard work that teams put in during the winter to develop a new Grand Prix motorcycle in order to challenge for the ultimate prize. It is also, invariably, a time for teams to size each other up. So, when the pit lane lights turned to green, the riders set off to discover and improve the motorcycles that they will ride at the season opener in Qatar on March 29, 2015. Here's our round up of the three days of testing at Sepang, that ended with Marc Marquez once again breaking a lap record!

The reigning world champion Marc Marquez, who requested that Honda make some changes to the 2015 factory motorcycle after the tests in Valencia, rode three different bikes on day one. HRC brought in the 2014 championship winning bike, the 2015 bike that Marquez rode during the Valencia test and a completely new bike which Marquez dubbed as the compromise bike. He labelled the new bike so, because it offered the perfect compromise between the superior front-end feel of the 2015 Valencia bike and the braking ability that the 2014 bike offered. On a fresh set of tyres, the double world champion jumped from fifth to first on the penultimate lap and set the record for the first day with a lap time of 2 minutes and 0.262 seconds. The second Repsol Honda rider, Dani Pedrosa, posted the fifth fastest time of 2 minutes and 0.745 seconds

Valentino Rossi on board the 2015 YZR-M1

Day one saw Monster Yamaha rider Valentino Rossi finish the session just 0.118 seconds off Marquez's time. The multiple world champion who finished second in the overall standings last season said that he felt positive about the way the factory YZR-M1 performed,despite the fact that Yamaha are yet to install the seamless shift gearbox which will now work during downshifts too. Hoping to test a bike with that particular gearbox as soon as possible Rossi said, "This is the way Yamaha works, small steps, but it is always 99 per cent better. You make a small step but you are sure that if Yamaha brings something, then it is something better." Rossi also added that he is focusing on his riding style to counter the advantage that Marquez carves out towards the closing stages of a race when tyre degradation rears its ugly head. Meanwhile Rossi's team-mate Jorge Lorenzo was impressed with his new M1 and said that it was a much better than the 2014 bike.

The second day of the Sepang test saw Lorenzo rise to the top of the timing sheets with a blazing lap time of 1 minute and 59.9 seconds. The Spanish rider hailed the new motorcycle as a very complete bike that evoked a feeling which he described as 'fantastic'. Lorenzo said, " I like a lot the new Yamaha. I think it is a very complete bike. We just need to improve the braking. If we can do that at the next test for sure we are going to be very prepared for Qatar." He also added that, "For the moment we don't have an advantage, but I think we are in the level for trying to win races." The second day, however, was one to forget for his team-mate Rossi who fought a vibration issue due to tyre chatter during his stint which left him by his own admission, unsatisfied. The Italian said that his team managed to fix the problem to an extent but he was unable to bridge the 0.713 second gap to the top time, eventually ending the day in sixth position. 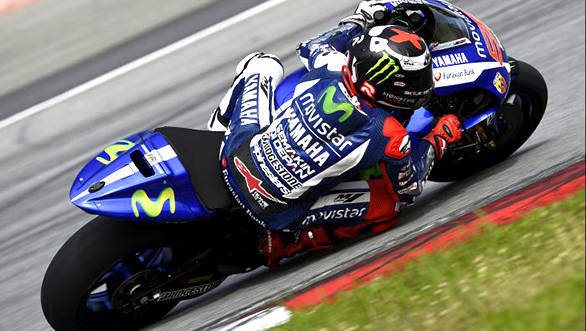 Marquez who rode for the highest number of laps on day two, deemed the engine in his 2015 RC213V as more aggressive than the previous bike. He said that the bike was still difficult to ride but had good potential. He finished the day in third position after recovering from a minor fall during the closing stages. Team-mate Dani Pedrosa managed to improve his performance over the previous day and ended in fourth position.

Contributing to the days headlines were strong performances by the factory Ducati team which fielded their improvised GP14.3 bikes. Andrea Dovizioso was just 0.052s off Lorenzo's time, however, he managed to do so on the soft Bridgestone tyre. Although he was happy about the performance, he stated that he was looking for consistency from the Desmosedici. The second Ducati factory team rider, Andrea Iannone, felt motivated and confident in the improved braking and cornering that the bike offered. Ducati will unleash their 2015 GP bikes in the next test session at Sepang later this month. The resurgent strides that Ducati displayed has in fact caught the attention of Rossi who believes that the Italian team could pose a serious threat not only to Yamaha, but also Constructors title holder, Honda.

The third and final day belonged to Marc Marquez as he displayed his intent for the 2015 season by posting the best lap time ever at the circuit, of all three days. The scorching 1 minute 58.8 second lap around the 5.5km circuit delighted the young Spaniard as he reveled in the improved front end feel of his bike but at the same time noted the reduced grip at the rear when leaned over, which he expects Honda to pay more attention to during the next test session. He also completed a race simulation which helped him gain valuable information as he tried out new settings for the electronics. His team-mate and fellow Spaniard Dani Pedrosa was second with a time of 1 minute and 59 seconds which was set in the morning session. He then went on to complete a 20 lap race simulation which turned out to be the best of the field. 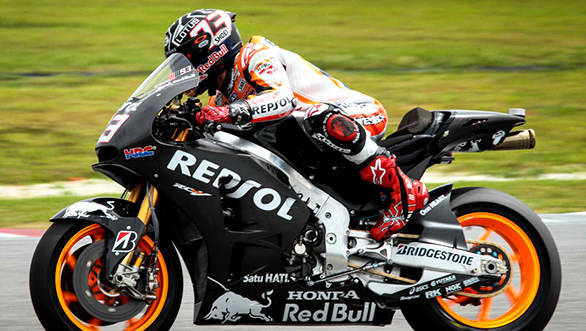 Rossi on the other hand finished fourth and was not surprised with Marquez's achievement as he is aware of his adversary's prowess over the course of one lap. The Italian managed to set a personal best lap time of 1 minute 59.4 seconds. During his race simulation, Rossi tried out different settings on the engine maps as well as a different swing arm but he did not like them. At the end, the Italian felt that the Yamaha is not far away from their only problem - the Honda. Rossi also concluded that Yamaha need to improve the bike's ability to brake even more deeper than it already does to take the fight to Honda.

Jorge Lorenzo finished behind his team-mate, but there on posted consistent 2 minute lap times during a 14-lap race simulation, which he believes is more important since a race is not about being quick for a single lap. The 2010 and 2012 MotoGP champion also highlighted the fact that the YZR-M1 performed brilliantly on a track that does not naturally favour it, which points to the improvements that Yamaha has made.

Ducati rider Andrea Iannone finished third with a lap time of 1 minute 59.3 seconds while his team-mate Dovizioso clocked a time that placed him at a distant seventh. The Sepang test featured the entire MotoGP line up, except for Pramac Ducati rider Yonny Hernandez who is recuperating after injuring his shoulder in an accident while training. Teams will resume testing at the Malaysian track from February 23 - 26.