Yamaha has managed their first win in the 8 Hours of Suzuka since 1996! It was a rather thrilling victory for the team, with Pol Espargaro, Bradley Smith and Katsuyuki Nakasuga taking the chequered flag 1min 17.411sec ahead of the field. What did make the win rather special was the fact that Espargaro and Smith, who comprise Tech 3 Yamaha's MotoGP line-up, along with team-mate Nakasuga, managed to win despite a 30-second Stop-Go penalty that they incurred midway through the race. 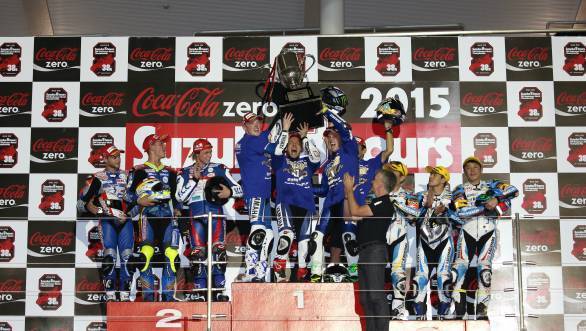 Something of an upset is what it was for the Musashi Honda team, who were no doubt waiting for their third win in a row at the event. However, when their leading motorcycle, piloted by Casey Stoner no less, crashed due to a stuck throttle, it signalled the end of the race for them.

This was Yamaha's first factory entry at Suzuka since 2002. And what Espargaro and Smith will be hoping for, is 2016 contracts in MotoGP. Can't blame them!