Tata Motors will conduct the second season of the T1 Prima Truck Racing Championship at the Buddh International Circuit on March 15, 2015.  Six teams will be participating in this one of a kind event in India. The FIA and FMSCI  approved event will feature international truck racing drivers competing in 12 Tata Prima race trucks over the course of one qualifying race followed by the main race. 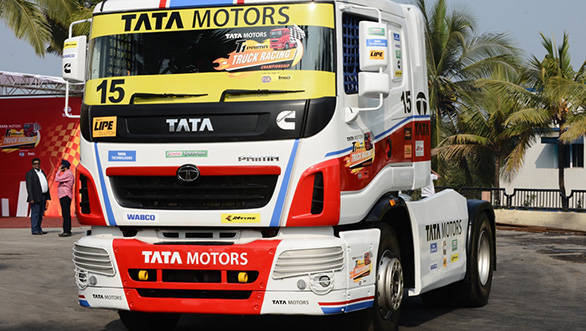 Tata says that the new race trucks for season two feature improved aerodynamics as well as performance. Kitted with a 9-speed Eaton transmission and powered by asix-cylinder, 8.9-litre Cummins diesel engine that produces 370PS of power and 1,500Nm of torque, the truck now has a top speed that stands at 130kmph, up from 110kmph.The truck features revisions such as reduced chassis height and 10 per cent reduction in weight which contribute to  the performance.

The WABCO braking system also gets upgraded and now consists of a 120-litre water tank to cool the truck's massive brakes. Additions to the race truck include a bigger steering wheel, fixed rear mud guards and repositioned tail lamps. 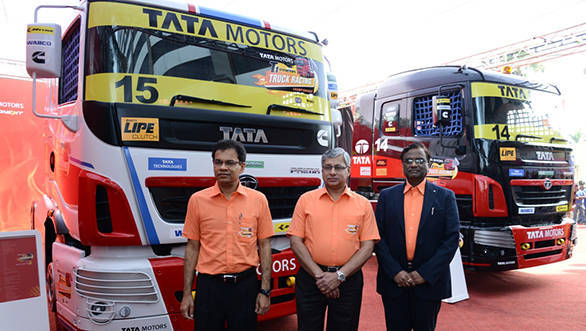 Another highlight of this year is the T1 Driver Programme which will help Tata induct and train potential truck racing drivers from India. R Ramakrishnan, senior vice president (Commercial), Commercial Business Vehicle Unit, Tata Motors said, "Off the back of a great 2014 campaign, Tata Motors is determined to continue this positive momentum into the new season. Showcasing our commitment to the sport, we have introduced a slew of new initiatives in the 2015 race truck, along with our new Indian driver selection and training program for 2016. As we ready ourselves for season two of the T1 Prima Truck Racing Championship, we hope to strengthen our on-track record, as we continue to lead in a rapidly changing Indian market place, with new-generation trucking technologies and solutions. The event will definitely be one of the highlights of the year."

The inaugural championship was won by Stuart Oliver of Team Tata Vecton.