Exactly after two years of launching the V40 Cross Country, Volvo India has launched the V40 hatchback in our market. The V40 is essentially the same car but with a more sober looking design fit for the concrete jungles. Visually, it loses the scuff plates and the rugged body cladding. The front bumper gets similar LED DRLs and save for these the frontal design is quite understated. The mesh grille from the Cross Country is replaced with a more conventional three-slat grille and it wears the trim badging The rear is still the pretty angle for the V40 with the black border treatment for the windshield and the boot lid that wedges out. The Volvo V40 is being offered in two trims - Kinetic and R-Design and the latter comes with a panoramic sunroof and some additional body kit and accents.

Inside the familiar nose is the same engine as the Cross Country. So what you get is a 2.0l diesel producing 150PS and 350Nm of torque. With these figures, the V40 is the most powerful diesel hatchback in its segment. The engine drives a front wheel drive configuration through a six speed automatic transmission. 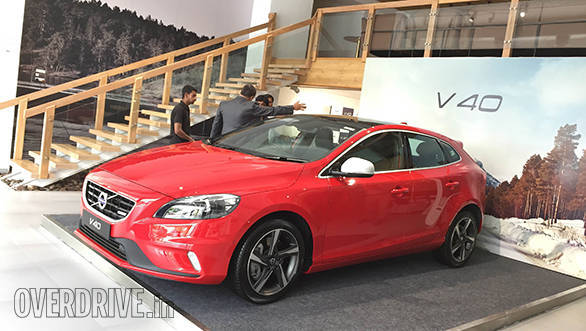 Safety is always top priority for Volvo and the V40 gets eight airbags as standard fitment. Also onboard is a side impact, whiplash and driver-knee protection systems. It also comes with the City Safety tech which arms itself at below 50kmph and provides automated braking system. A segment first is the pedestrian airbag system which reduces impact to the pedestrian in case of a frontal collision by raising the bonnet and deploying an airbag over the windshield.

Creature comforts include a parking assist system and comes ready for an optional rear view camera. The V40 also gets the adaptive TFT instrumentation which changes colours as per the driving mode. The car comes with mood lighting as well, which is a segment first. Also standard is leather upholstery. 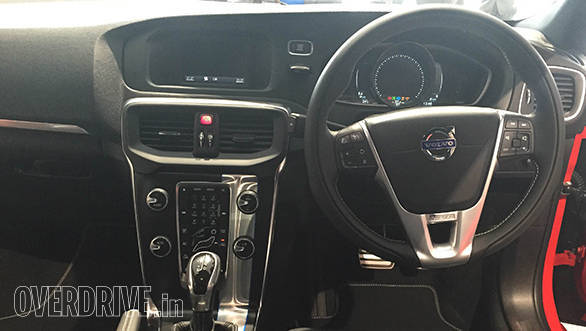 The natural rivals for the V40 hatchback are the BMW 1 Series and the Mercedes-Benz A-Class and B-Class. The D3 Kinetic and D3 R-Design trims are priced at ? 24.75 lakh and ? 27.7 lakh respectively. A petrol variant could be launched at a later stage, but there are no concrete plans yet, says Volvo India. The ground clearence of the Volvo V40 is 136mm as compared to the 145mm on the V40 Cross Country

The Volvo V40 is being imported from Kent in Belgium, via the CBU route and despite that, the pricing remains competitive,  a positive move by Volvo India.