The biennial Auto Expo will be back in 2016 and this time, it promises to be "bigger, better and more exciting". The Auto Expo's Motor Show will be open to the public from February 5-9, 2016 and will be held at the India Expo Mart in Greater Noida.

The Society of Indian Automobiles Manufacturers (SIAM) along with the Automotive Component Manufacturers Association of India (ACMA) and the Confederation of Indian Industry (CII) claim to "raise the grandeur of the event by a few notches" this year. They have increased the indoor exhibition space of this venue to 68,000 square metres (from the earlier 62,000 square metres), in order to accommodate the increase in visitors and exhibitors. 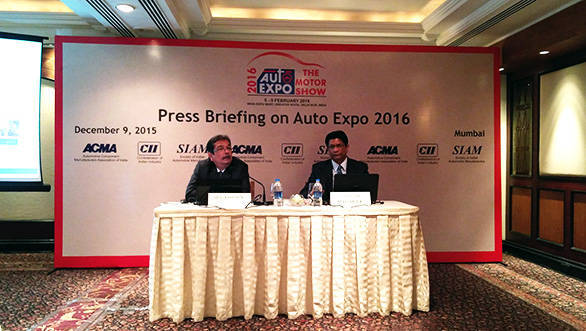 They expect around six lakh visitors this year which is an increase by 20 per cent compared to last year. The number of exhibitors for the Auto Expo this year is estimated at 65 (and counting), compared to the 55 that presented last year. The event will host regulars such as BMW, Audi, Fiat, Maruti Suzuki and Jaguar Land Rover, to name a few, while brands like Abarth, BMW Motorrad, Jeep, Indian Motorcycle, DSK Benelli etc will be making their Expo debut this year. However, some of the two-wheeler industry giants like Bajaj and Harley-Davidson will not participate this year.

The 2016 Auto Expo, like in the previous years, will have a vintage car display, driving and riding simulators and other outdoor activities. New this year, though, is an automotive design challenge for engineering and design students - more details are awaited on this as it was touted as a "surprise", to be revealed only at the event. There is also a bio fuels workshop being held during the Expo, which should be the other interesting thing to watch out for.