The Mercedes-Benz S 600 that was launched late last year was one of the most expensive and exclusive vehicles on sale in India. The fully armoured limousine could withstand attacks from automatic assault rifles, sniper guns and even grenades. It featured advanced fire extinguishing and emergency fresh air systems and was one of the most incredible cars we drove last year . 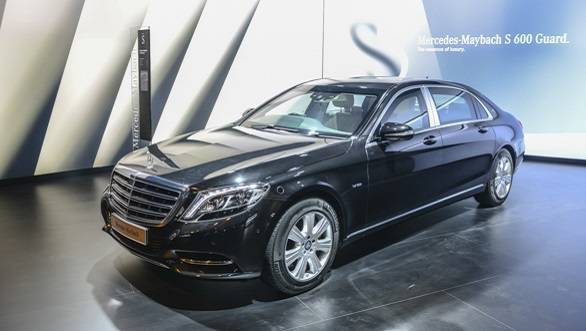 Now, Mercedes-Benz has taken the game even further forward with the display of the Maybach version of the S 600 Guard at their stand at the Auto Expo. Essentially the same car as the S 600 Guard, the Maybach will offer even more luxury features in the same vein as the S 500 Maybach vs a standard S 500.
Mechanically, the car will remain the same which means buyers will get an ultra smooth and refined twin-turbo V12 engine that produces 530PS and 830Nm mated to a 7-speed torque convertor automatic. Special Michelin PAX tyres can allow the car to run at high speeds for a distance of about 30km even when fully deflated.
The 'standard' Mercedes-Benz S 600 Guard costs Rs 8.9crore ex-showroom and considering the extra luxury and customisation options we expect the Mercedes-Maybach S 600 Guard will cost a fair bit more. Look forward to a launch in the coming months.