Ashok Leyland has unveiled four products at the ongoing 2016 Defexpo India. It has unveiled an all-terrain truck driving simulator, a Field Artillery Tractor (FAT) 6X6 based on the Super Stallion, the Rhino 4X4 and the Ambulance 4X4. The 9th edition of the Defexpo is being organised from March 28-31 at Goa.

The truck driving simulator has been co-developed with SAAB and simulates varied types of terrain and weather conditions. It even allows the integration of multiple simulators for group training like driving in a convoy. 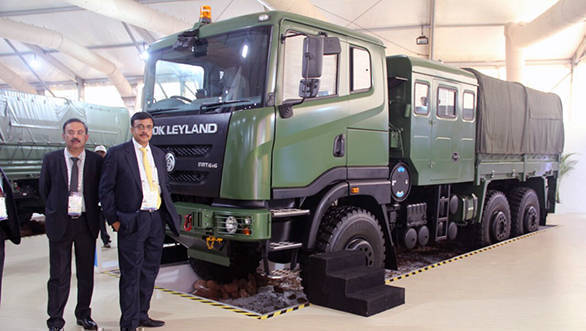 The Field Artillery Tractor (FAT) 6X6 is built on the Super Stallion platform and functions as a common tower for all artillery guns. Recently, the Indian Army had placed orders of over 450 Super Stallion-based vehicles with the company.

The Rhino 4X4 comes equipped with automatic transmission, high ground clearance, step climbing capability, ABS and provision for HVAC along with other features.

The Ambulance 4X4 gets a double walled insulated body which the company says maintains inside temperature and the rear air suspension ensures a smooth ride over broken roads. Ashok Leyland says it has received orders for 825 vehicles in 4X4 and 4X2 configurations.