CS Santosh managed to extend his lead in the Moto Category to around 44 minutes after Leg 3 and 4 of the 2016 Maruti Suzuki Desert Storm. TVS Racing's Aravind KP is at second place with a total time of 7:32.12s, while Sanjay Kumar is in third place with 8:06.08s. Jes David meanwhile, went from third to fifth after a slow Leg 4.

In the Xtreme category, Aabhishek Mishra (co-driver PV Srinivas Murthy) continues to hold his lead, with a total time of 8:17:24s, while Suresh Rana (co-driver Ashwin Naik) managed to close the gap by around six minutes after these two legs with a time of 8:27.55s. Amanpreet Ahluwalia (co-driver Virender Kashyap), who is in third, fell further behind by close to 60 minutes. 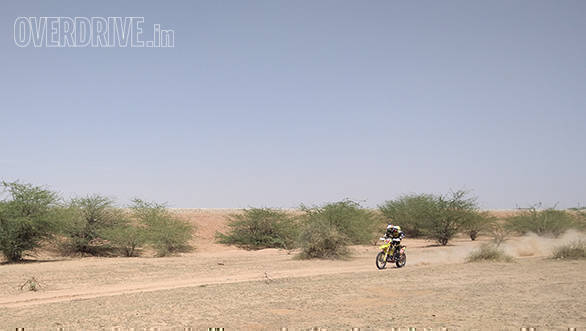 Leg 3 held the first night stage of the rally, in which only the participants of the Xtreme category competed. The stage went live at 3.30am and crossed 41.09km through the desert with quite a few people losing their way every now and then.

The next two stages, which spanned 64.74km and 50.71km, were harder surfaces, which allowed for more speed. Leg 4 hosted just one Special Stage just outside Jaisalmer, where the larger sand dunes had begun. Leg 5 is split into two parts with  a and b  with two stages in each. The first two stages will be held during the day, while the next two will be night stages, which end at around 4.30am.