Nissan has revealed the Titan Warrior Concept at the 2016 Detroit Auto Show. Based on the new 2016 Titan XD, the Titan Warrior Concept uses the same ladder frame and Cummins sourced 5.0-litre V8 turbo diesel engine and the standard six-speed Aisin automatic transmission. In comparison to the standard Titan XD, the concept is almost three inches taller, around six inches wider and rides on huge 37-inch off-road tyres. However, it retains the Titan XD Crew Cab's standard wheelbase and length. 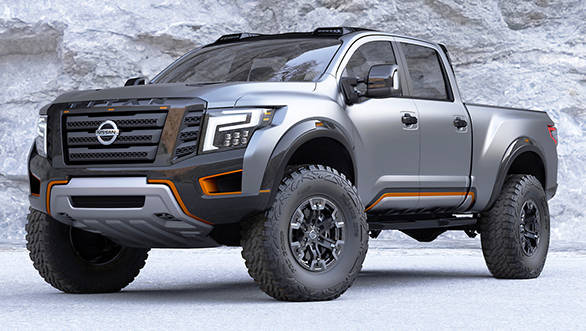 On the styling front, the Nissan Titan Warrior Concept gets a custom lower fascia with a skid plate, LED headlights and wide fenders with gloss-black flares and integrated side-marker lights. On top, there's roof-mounted low-profile LED off-road lights (six per side), and a spoiler is integrated into the rear of the cab. The hood features functional air vents and flows into the all-black grille. The redesigned rear bumper incorporates quad exhaust outlets. The tailgate has been restyled too and gets a large black trim panel and is topped by another spoiler. 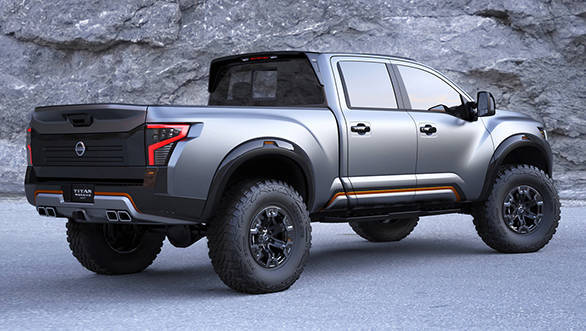 On the inside, it gets black cloth-and-leather seats with orange accents, machined-aluminum steering-wheel spokes, a trio of auxiliary gauges atop the center dash and a center console with heated and cooled cupholders. 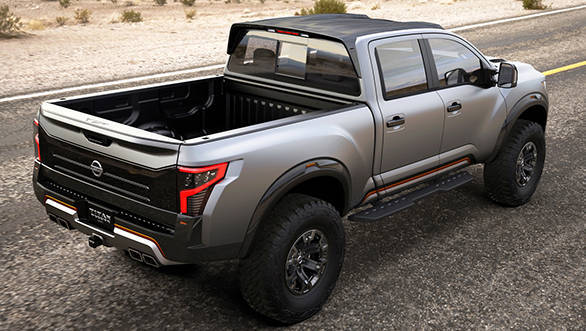 The Titan Warrior Concept builds up on the Project Titan, a crowd-sourced customization of an original-generation Titan that sent two U.S. military veterans representing Wounded Warrior Project® on a once-in-a-lifetime adventure in Alaska. The new concept truck also pays homage to Nissan's heritage of off-road racing and adventuring, which goes back to the days of Baja Hardbody competition pickups and Paris-Dakar Rally treks.