Skoda will be showcasing a 6-seater SUV concept at the upcoming Geneva Auto Show 2016. This 6-seater Skoda SUV concept, the VisionS, will go into production in the second half of 2016. 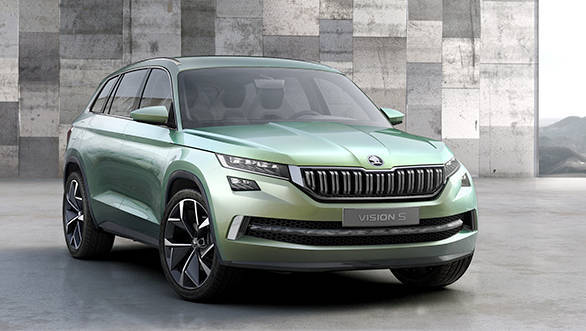 The Skoda VisionS Cconcept is the first car from the Czech manufacturer to feature a three-row seating. Built on VW's MQB platform, the Skoda VisionS features a new design language that will be used for the marque's upcoming SUVs. The car is 4.7m long, 1.91m wide and 1.68m tall. Positioned above the Yeti, the VisionS, rumoured to be called the Kodiak, has a wheelbase of 2.79m. 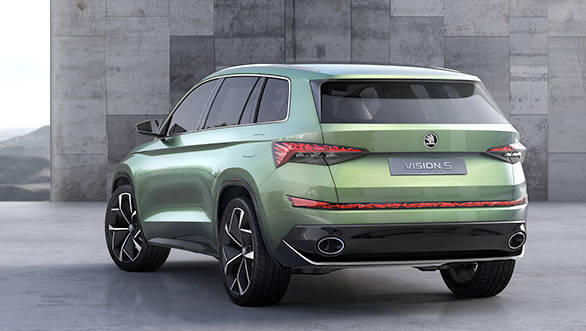 The talking point of the Skoda VisionS will be its plug-in hybrid drivetrain. The 1.4TSI ICE makes 156PS/250Nm. It works in tandem with an electric motor (40kW/220Nm) to produce 225PS and with the 6-speed DSG allows the VisionS to accelerate from 0-100kmph in a claimed 7.4s. The top speed is close to 200kmph. Skoda says that the VisionS concept sips only 1.9litres of petrol per 100km, translating to a fuel efficiency of 52.63kmpl. On electric power alone, the SUV can travel up to 50km and with the assist from the petrol motor, it will cover 1,000km before needing a refuel.

Another 85kW/270Nm electric motor helps drive the rear wheel axle while the first electric motor drives the front. Both the axles work independently transforming the VisionS to a four-wheel drive SUV which doesn't need a mechanical coupler. The 12.4kW Li-ion battery is also positioned at the rear axle.

Inside the cabin, the Skoda VisionS will large displays for each passenger, allowing them to connect to the main infotainment unit individually.

More details about the Skoda VisionS will be available at the unveil in March 2016.