Leg 4 on the fourth day of the 2016 Maruti Suzuki Dakshin Dare was quite eventful. The participants across various classes put up a strong performance in an attempt to set the fastest possible time of the stage. However, the challenges today were the toughest so far. Although the stage for Leg 4 was along the same course as on Leg 3 (around the Vani Vilasa Sagara Dam)-, the participants had to drive/ride in the opposite direction. This meant most of driving was downhill over very treacherous terrain with sheer drops on one side. 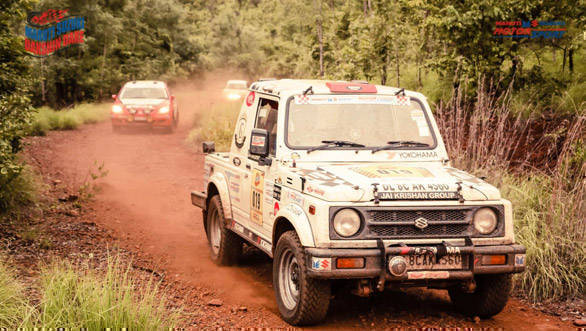 Participants had to complete two runs of the stage, totalling 110 km. On the first run, Suresh Rana was blitzing through the course when all of a sudden one of his Vitara's tyre suffered a puncture. Sandeep Sharma used this opportunity to get ahead of Rana and try to reduce the lead. Rana and his co-driver meanwhile changed the wheel in five minutes and rejoined the rally. In the next run, Rana drove flat out (in his own words) and managed to retain the lead in the rally by 3 minutes and 35 seconds. Rana completed the Leg in 6 Hours 17 minutes and 3 seconds. 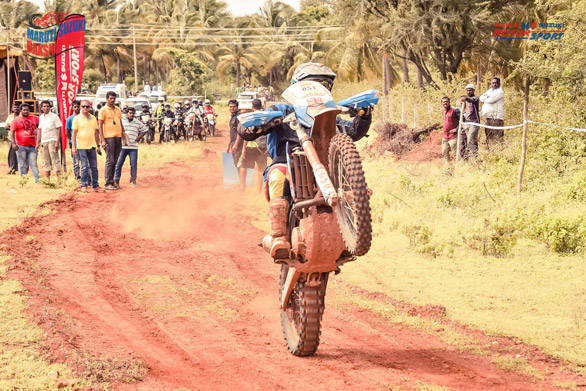 There were a couple of scary crashes too but the safety levels of a modern day rally car meant none of the drivers/co-drivers were seriously hurt. In the first incident, competition number 14, Anwar Khan and Shadab Parvez had a narrow escape as their Gypsy skid and fell off the edge of the mountain. Luckily, the drop was only a few feet and the roll cage did a superb job of protecting its occupants.

In another incident, Ryan Lee and Aatish Sharma's Gypsy toppled to its side upon hitting a small ditch. They were barely 2 km from the finish when the rear left tyre of their car clipped the ditch throwing the rear end of the car in the air. Upon landing, the rear fish tailed and fell to its right. While there is some damage to the body work, the car is mechanically fine. Ryan however, suffered a few bruises to his right elbow and an injured shoulder. 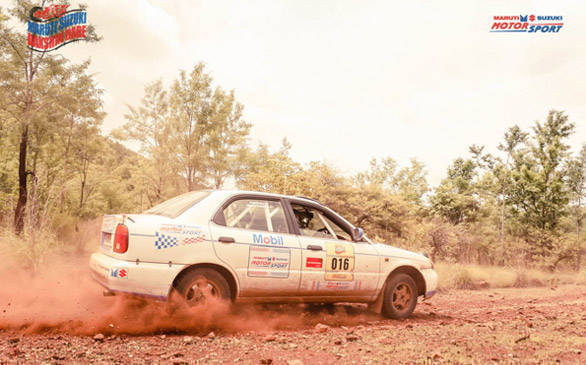 In the Ultimate Bike category, Nataraj is steadily increasing his lead in the Rally with each passing stage. At 41 minutes and 15 seconds he is in quite a comfortable position. The fight for the second spot, however, is heating up. Febin Jose has moved into second with Akash Aithal in third.

In the Endurance (TSD) category Ganesh Moorthy (co-driven by Nagarajan T) is leading the rally with a day-end penalty of 16 minutes and 39 seconds followed by Raghu Nandan and co-driver M Prakash with a penalty of 17 minutes and 6 seconds.

The Rally now moves to Goa and will cover a distance of 500 km, of which approximately 200 km will be competitive. Who'll win the 2016 Maruti Suzuki Dakshin Dare? Follow the updates to find out.