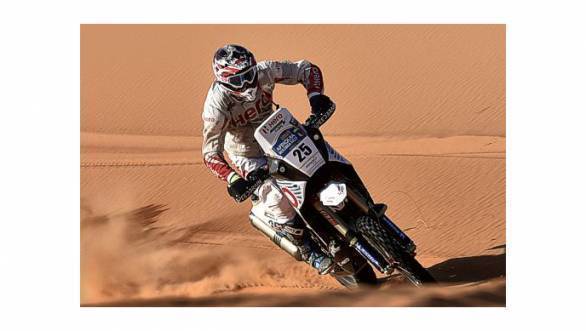 After a strong showing during the first stage of the 2016 Merzouga Rally, Hero MotoSports Team Rally continued their good form on Stage 2. While Joaquim Rodrigues managed to strengthen his position in the standings, CS Santosh progressed through the order and managed to break into the top 20.

The third day, and the second stage, of the 2016 Afriquia Merzouga Rally had two tricky parts to it. Of the 340km distance to be covered overall, the riders were faced with 181km of competitive stages. Rodrigues, who is new to the rally-raid format, proved that he has what it takes to excel in long distance rallying. Held up when fellow competitors ahead of him left so much dust in the air that it hampered his visibility, J-Rod was patient. He only wrung the throttle on his Speedbrain 450 Rally to the max when the situation cleared up. This meant that he was able to finish the stage in eleventh position.

It was better than yesterday," the Portuguese rider said. "I didn't really get lost and finished the race pretty good. I'm happy because with each stage I understand better how this rally thing works. Now it's about learning more and more and place my Hero well in the standings."

On what is one of the longest days of the rally, CS Santosh managed to finish the stage in 21st position. Santosh managed to navigate better, paying close attention to the roadbook, and despite getting a little lost on two occasions remained calm under pressure. "The overall feeling remains very positive," said the first Indian to ever compete in and complete the rigorous Dakar Rally.

"On days like these it's important to stay concentrated," added the team's Managing Director Wolfgang Fischer.

The Rally now moves to the marathon stage where the bikes need to be serviced by the riders themselves. We'll keep you posted on how they fare overall.