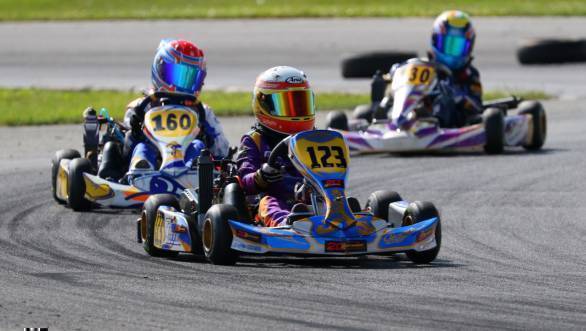 Indian karter Shahan Ali Mohsin, who currently leads the Micro Max Category of the Asian Karting Championship, recently competed in the Rotax Euro Finale held at the Speedworld Kart Circuit in Austria. Shahan was one of only two drivers from Asia nominated to take part in the event, with the other being Malaysia's Oscar NG. The competition was stiff, with a total of 48 karters in the Micro Max category.

The conditions at the very outset of Shahan's stint in Austria were less than desirable - cold and rainy. Fortunately, though, things improved as the weekend wore on. Shahan, racing for the Uniq Racing Team, was able to get plenty of track time.

During qualifying, Shahan was able to place ninth in his group, and 18th overall. However, there were three heats that would decide Shahan's starting position for the final race. The 12 year old karter managed to finish 8th, 5th and 8th out of a grid of 41 in each of the heats. A 12th place classification for the pre-finals ensured that he was able to hold his head high.

In the pre-final race, with a grid of 34 drivers, Shahan was hoping to be close to the top five. However, given the level of competition, this wasn't quite so easy. He had to battle very hard all through in order to finish 10th, in a race that had 33 finishers in all.

For the final race, Shahan managed to get a good start, and quickly made up two positions. Then he started making his way up the grid. On the eighth lap of the race, he was closing in on the drivers ahead of him in 6th and 7th position, when he was hit by a driver behind him. This meant that he got pushed off the track and could only rejoin a lap down. Eventually Shahan finished 29th overall. The other driver involved in the incident incurred a 10 second penalty, and finished 21st overall (despite finishing 9th on track).

"I am still trying to absorb whatever happened throughout this week  it has been a landmark experience for me and there is so much that I have learnt in this short span of time", said Shahan.

Shahan is set to compete at Round 4 of the JK Tyre National Rotax Max Karting Championship scheduled for August 20-21, where he leads the championship in the Micro Max category.