Toyota has taken the wraps off the much anticipated second-generation Fortuner which is expected to make its Indian debut later this year or at least at the 2016 Auto Expo. Though based on a Hilux again, the Fortuner as you would expect, wears a more urban design theme with sleek lines. It still has a butch stance that you would come to expect from a Fortuner but the new face completely sets it apart from its successor. It features a trapezoidal grille that is flanked by thick chrome plates that flow into the new sleek headlights. It mimics the effect of the elongated LED-laden headlights from Land Cruiser Prado, if you will. The headlight assembly features LED DRLs and bi-LED projector beam lamp on the range topping model. The taillights have a similarly-themed sleek design too. The bumpers are large and while the rear ones look drab, the ones at the front seem overdone with deeply recessed fog lamps, plenty of detailing and a lot of chrome, of course (should be an instant hit in our market). 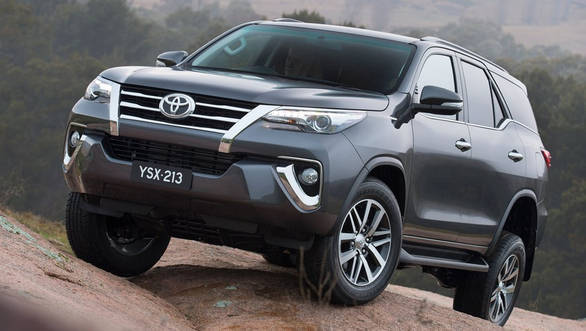 The character lines are quite subtle but the belt line grabs attention with its prominent kink in the C-pillar. Like its predecessor, all the pillar are blackened out and the C- and D-pillars also get a glass finish to mimic the effect of a floating roof. The new Fortuner comes with 17 and 18-inch options for its wheels and gets ORVM mounted turn blinkers, roof rails, the shark-fin antenna and side steps deepening on the trim level. Speaking of which, there is a new nomenclature for the Fortuner's trims - GX, GXL and Crusade. The 2016 Fortuner also gets all-four disc brakes, hill-start assist control and an emergency stop signal. 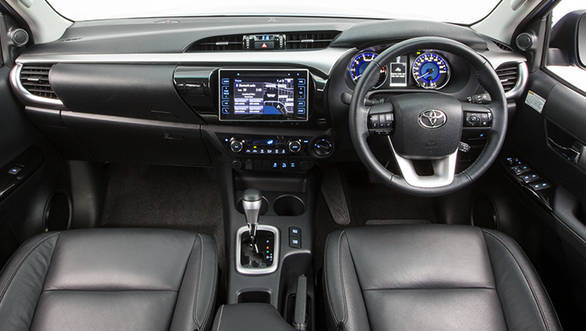 On the inside, the Fortuner gets a much better looking cabin than the one we are used to. It gets a touchscreen infotainment system, seven airbags and a smart-looking all-black theme. Nothing to write home about the layout and design though. The cabin gets blue backlight illumination, a two-pod instrumentation with a multi-info display. 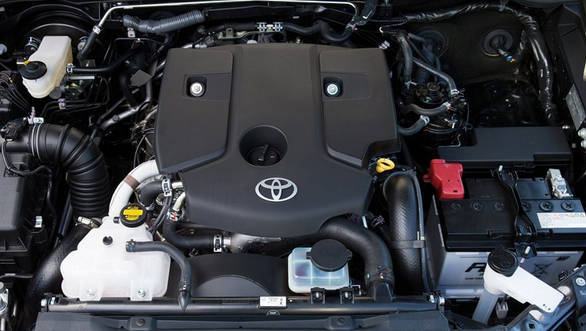 Under the hood of the 2016 Toyota Fortuner is a new 2.8-litre direct injection common rail diesel motor dubbed as the 1GD. It produces 177PS at 3,400rpm - which is about 8PS up than the range topping 3.0-litre D4D mill available on the current Fortuner in India. The big difference, however, is with the torque output - a healthy 420Nm with the manual transmission or 450Nm with the automatic box. Both the 6-speed transmissions are new. The manual is said to match engine and transmission speed for smooth shifts and we would certainly like to test that. The Fortuner also get a revised all-wheel drive system and there's a new differential in place which is said to be more efficient and better secured for off-road stints. Toyota claims a fuel economy of over 12.5kmpl (for the Australian driving cycle). 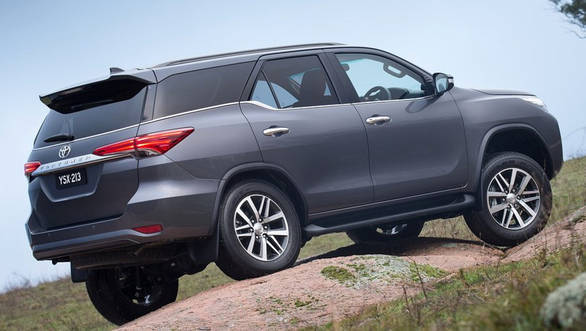