Volvo has launched the 2016 S90 D4 sedan in India at Rs 53.5 lakh, ex-Mumbai. The S90 is available only in the Inscription trim and has all the bells and whistles that one expects from a sedan in this class.

Volvo says that the S90 has virtually remained unchanged from the gorgeous XC concept showcased at the 2014 Paris Motor Show. The Volvo S90 replaces the S80 sedan which was the company's flagship four-door car for quite some time. The face of the car has the familiar Thor's hammer headlamps and grille. The S90 wears features sleek bodywork and looks the freshest of the lot. The S90's cabin, resembles that of the Volvo XC90. The upholstery has little Swedish flags in it and the Sensus infotainment system, like in the XC90, displays a plethora of information. Attention to detail is plenty with Volvo claiming that the seats have been designed in conjunction with orthopaedics to ensure maximum comfort in all conditions for the occupants. 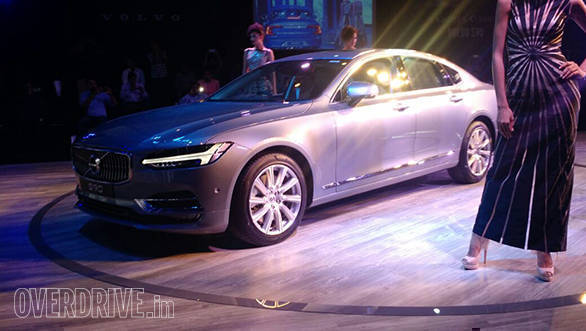 Under the hood of the new Volvo S90, as of now, is the 2.0-litre 190PS/400Nm 4-cylinder turbodiesel. At the first drive review, we found the S90 to be a very refined car overall with minimal turbolag. The 8-speed automatic gearbox was also very smooth in operation and responded to throttle inputs neatly.

Unfortunately while radar-approved systems made their way to the XC90, there aren't any similar technologies in the S90. Expect the S90 D5, which will be here in 2017, to have these radar-based technologies.