2017 APRC: Gaurav Gill loses lead at Rally of Whangarei due to damper issues on his Fabia R5

Gaurav Gill might have had a slim lead after the Super Special Stage of the Rally of Whangarei, the first round of the 2017 Asia Pacific Rally Championship, but that quickly slipped away after the first day of running. Gill's Team MRF Skoda R5 was plagued by damper issues, which meant that he lost his lead. In fact Gill ended the day 33.2 seconds behind his team-mate Ole Christian Veiby. 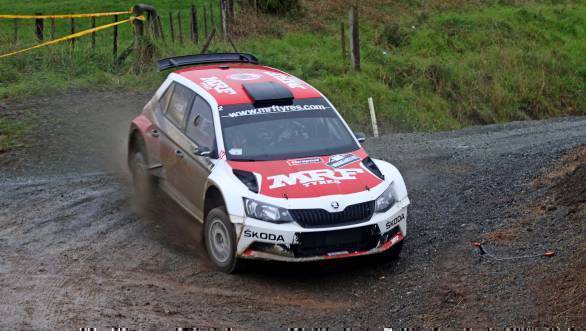 While Gill (co-driven by Stephane Prevot) and Veiby (co-driven by Stig Rune Skjaermoen) did battle it out during the initial stages of the rally, it was the Indian driver who was ahead. The double APRC champion was 1.7 seconds ahead after the first four stages (one of which was cancelled) of the day were completed. On the second loop of the day, where the same stages were repeated, Gill's R5 suffered issues with the damper that meant that he struggled with a lack of grip. This allowed Veiby, who had no issues with his car at all, to move into the lead, and then extend the lead to over 33 seconds.

Tomorrow's six Special Stages will be run over 108km. If everything goes according to plan, Veiby and Gill will be at the head of the order at the end of the rally. Jari Ketomaa in his Mitsubishi Mirage trails Gill by 1min 42.5sec.

Said Veiby at the end of the day,"We started at a comfortable pace initially, but stepped up the speed in the second loop. I particularly enjoyed the long Stages which were amazing and I could make time on Gill, but he was quicker on the shorter tight and twisty Stages. Overall, I am happy as we didn't have any issues with the car."

Meanwhile Gill said, "I had a good run in the morning though I started first and had to sweep the gravel off the track. In the afternoon when it rained heavily, I had problems with the dampers due to which there was no front-end grip. I lost confidence thereafter and couldn't really push. Also, there was plenty of water on the route and every time I went through at speed, I lost pace while the going was much clear for those behind me. Tomorrow is another day and I am up for the challenge."