Kawasaki India has launched the new Ninja 1000 at Rs 9.98 lakh, ex-showroom, pan-India. Along with the launch of the Ninja 1000, the company has also now started sales of the Z900 minus the optional kit that came along with the motorcycle earlier this year. The motorcycle is priced at Rs 7.68 lakh as opposed to the earlier Rs 9 lakh and now comes without the fly screen, engine casing cover, crash bobbins, pillion seat cowl, 12V charging socket and radiator guard. The Ninja 1000 is assembled in India and only 20 units have been assigned for the Indian market for now. Bookings have already started for both the Ninja 1000 and the Z900. 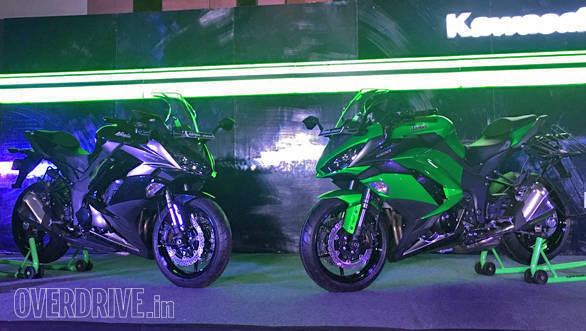 The third-generation Kawasaki Ninja 1000 gets a sharper design reminiscent of the company's supersport offerings. This includes the two-piece fairing which is now wider and claims to offer the rider with increased wind protection. Adding to this is also the new 3-position adjustable windscreen which can be adjusted without the help of tools. Also new to the Ninja 1000 are the LED headlamps which Kawasaki India says that consumes 50 per cent less power. There is also the LED position lamp.

Kawasaki says that they have also positioned the mirrors 20mm further outward to aid for better visibility behind. The pillion seat too is longer and has got more padding than before now. Complementing its touring abilities are the foot pegs which now come with integrated stays. This, in turn, will aid the fitment of panniers better.

Coming to the engine, there are no revisions to the Euro-IV compliant 142PS/111Nm 4-cylinder liquid-cooled motor. However, Kawasaki has added ride-by-wire, IMU and cornering ABS to the equation. The transmission is a 6-speed unit with slipper clutch. Kawasaki has revised the suspension (41mm pre-load adjustable inverted forks in front and a remote adjustable monoshock at the rear) for better damping capability. This has also resulted in the motorcycle now getting a lower seat height of 815mm.

We will be riding the Ninja 1000 shortly. Stay tuned for a detailed first ride report.