2017 MRF INMRC: Showdown time for Rajiv Sethu and Jagan Kumar in final round

The MRF MMSC FMSCI Indian National Motorcycle Racing Championship 2017 is set to be a showdown between defending champion Jagan Kumar and young challenger Rajiv Sethu, with only a point setting the two apart. The fifth and concluding round will begin this weekend at the Madras Motor Race Track (MMRT) with nearly 200 entrants in the fray in various classes.

In one of the most closely-fought championships in recent times, the Super Sport Indian (up to 165cc) class will headline the programme which commences on September 28 with practice sessions, followed by qualifying and 15 races that include One-Make championships for manufacturers Honda, TVS and Yamaha, spread over the next three days. While Honda Ten10 Racing's Rajiv Sethu leads the SS Indian (up to 165cc) class with a one-point lead, defending champion Jagan Kumar of TVS Racing is looking to end the season in a hattrick of titles. 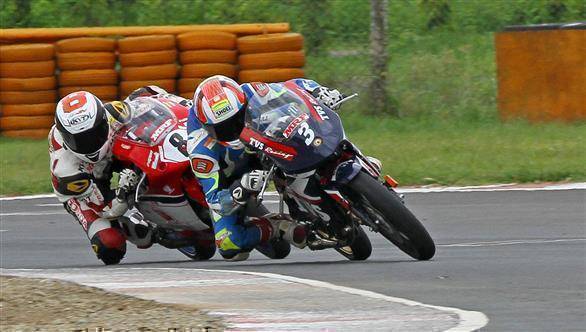 Jagan Kumar (no.3) took two wins in the Super Sport (up to 165cc) class in Round 4 to cut down Rajiv Sethu's (no.8) championship lead to one point.

Sethu, in his debut season in this class after clinching the Pro-Stock championship last year, leads the table with 123 points, including three wins, while Jagan, who won four of the eight races thus far, is placed second on 122. Behind the duo is Sethu's team-mate Mathana Kumar on 109 points. In the Pro-Stock class, Aravind Balakrishnan (Honda Ten10 Racing) is well-placed on 126 points ahead of Moto-Rev's Aravind Ganesh (105) who, without a win, has still been scoring consistently to be in the hunt.

Similarly, Amarnath Menon (Gusto Racing) enjoys a healthy 39-point cushion in the Super Sport Indian (300-400cc) class but needs to keep an eye on Deepak Ravi Kumar (Moto-Rev) who scored a double in the previous round to put himself in title contention. The Novice (Stock 165cc) category is set for a close finish. Sri Rahil Pillarishetty of Sparks Racing leads with 61 points with team-mate Peddu Sriharsha and RACR's Anup Kumar tied in the second spot with 50 apiece. A further six points adrift of the trio is another Sparks Racing rider Satyanarayana Raju. 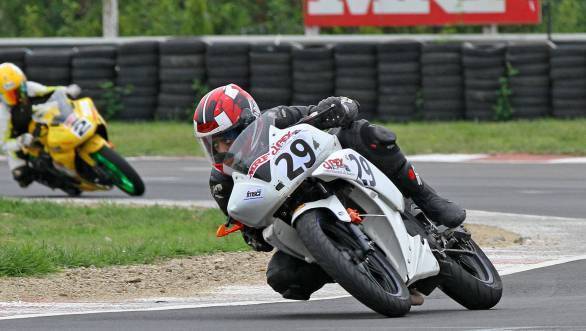 Aishwarya Pissay (no.29) has already won the championship in the Girls (stock 165cc) class in the previous round.

The final race in the Girls (Stock 165cc) category will be of academic interest as Bengaluru's Aishwarya Pissay (Apex Racing) had already sealed the championship with a round to spare, as she leads Indore's Kalyani Potekar (Speed Up Racing) by 34 points with a maximum of 25 to be won this weekend. The weekend will conclude with the fourth and final round of the MMSC FMSCI Indian National Drag Racing Championship for two-wheelers at the same venue with

The weekend will conclude with the fourth and final round of the MMSC FMSCI Indian National Drag Racing Championship for two-wheelers at the same venue with the practice session on September 30 and final runs the next day. The participants will enjoy the comforts of swanky, international standard pits which the Madras Motor Sports Club worked overtime to finish in time for last weekend's Asia Road Racing Championship.