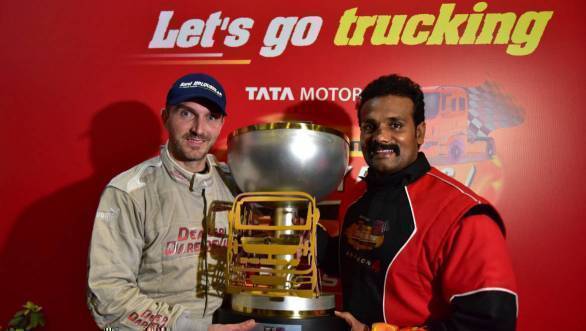 Race 1 of the Pro Class, which was the qualifier for the championship-deciding race, started of with some very close competition, which eventually led to Ryan Smith being trapped in the gravel trap after C3. In Lap 4, the same thing happened to Norbert Kiss at the very same spot. The race was then red flagged due to safety concerns after Lap 6, giving Vrsecky the win. Gerhard Korber took second place while defending champion, David Jenkins, took third place. Vrsecky managed to accomplish the same feat in the final race which ran for 15 laps. Norbert Kiss took second place while Korber took third.

Winning the Super class race with a significant lead was Pitambar, while Shivnihal Singh and Gurujant Singh took second and third. Nagarjuna A won in the Champion class race followed by Malkeet Singh and Bhag Chand.

Tata's 1,000 PS T1 Prima Racetruck did a couple of hot laps too and managed to set a lap time of around 1min 35sec. In comparison, the fastest time managed by the 400PS T1 Prima Truck during the races was around 1min 47sec.