That Karminder Pal Singh would take home the MMSC Volkswagen Ameo Cup 2017 title was clear after his commanding win in the first race of Sunday. However, the manner in which the last day of the season unfolded was full of excitement and challenges for the drivers. After rainfall on Saturday night, the races on Sunday began on a damp, overcast Madras Motor Race Track near Chennai.

Owing to this, all cars were quickly fitted with wet track tyres, a first for all drivers of the VW Ameo Cup 2017. This did not deter Karminder to rack up an early lead, which he kept increasing with each lap, until the last two laps when he slowed down as it began to be drizzle once again. Irrespective, he finished with a 12.3-second lead over second placed A Sandeep Kumar. 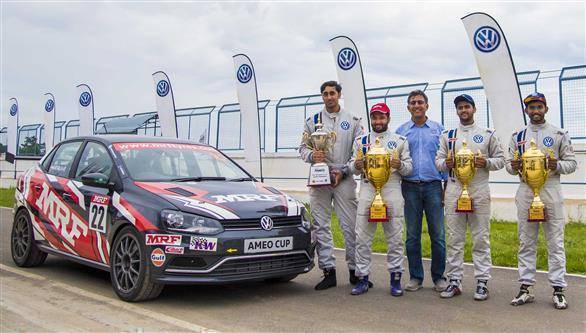 Karminder told OVERDRIVE that the wet tyres performed even better than the slicks they have been used to, and that he had to change his lines as well as braking points to match the changed conditions. Hia effort showed as he picked up the championship with a massive points lead, with one race still left for the day, and season.

While the second race on Sunday was to be a contest for the second and third spots on the championship table, it turned out to be dominated by a show of experience from guest driver Anning Sun, a competitor in the Polo Cup of China. Karminder placed second after some very aggressive driving on the fifth lap that left his number 9 winning Ameo Cup car with a bruised front end and also left Donovan Vaz with a major drop in position from second on the grid to a 17th place finish. The champion ended the season with podiums on 9 of the 10 races and a 138-point lead. 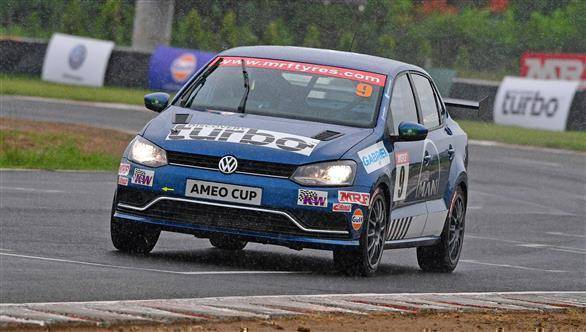 Karminder Pal Singh in action in Race 9 on Sunday, which was run on a damp track.

As a part of the sponsorship programme run by Volkswagen Motorsport India, Karminder will get a fully-sponsored season in the MRF Formula 1600 championship for the next season. Sandeep, meanwhile, managed two podium finishes and a fourth place finish in the last round to gain advantage over Saurav Bandyopadhyay and Dhruv Mohite. A fabulous performance on the last day of the racing by Dhruv with a fourth place after starting from 17th, and a third place finish helped him snatch the third place in the title from Saurav.

Junior Cup winner, Anmol Singh on lifting the trophy said, "This was my first ever racing campaign and I managed clean races in all the rounds of the season without any major damages. It was my aim to learn as much possible and not be aggressive and rash while chasing or defending during the season."

Sirish Vissa, head of Volkswagen Motorsport India commented that the season had been more exciting than the previous ones with the points race running into the last race. He also commended the team's quick response to the damp conditions by chasing to wet tyres in a short time frame for the first race. Vissa said that the cars are reliable as they are not will undergo many positive changes in the coming season.