The fifth and final round of the MRF MMSC fmsci Indian National Motorcycle Racing Championship was held last weekend, December 15 and 16, at the MMRT near Chennai.

On Saturday, Anish Damodara Shetty won the championship in the Super Sport 165cc class. This was Shetty's fourth win this eason and took his tally to 156, way ahead of second-placed Kevin Kannan (Rockers Racing) who remained on 115 after crashing out in the race. This helped him wrap up the championship with a race to spare. 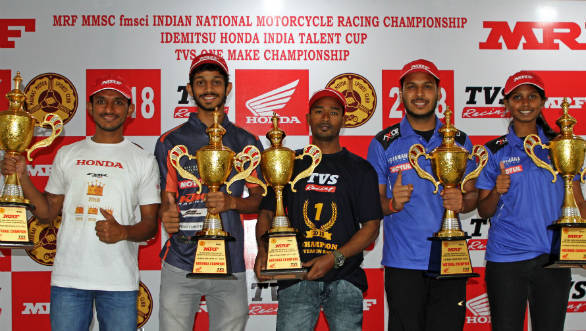 Ann Jennifer was crowned the Girls(165cc) champion. Jennifer's win was well-earned, her closest rival, Sparks Racing team-mate Ryhana Bee, led the race until the last lap. Jennifer had won four out of five races this season.

In the Pro-Stock 301-400cc category, Saturday saw the Hyderabad's Satyanarayana Raju (Gusto Racing) win to take a 14 point lead over second placed Amarnath Menon, also Gusto Racing. Their tally stood at 144 and 130 points respectively and were followed by Prabhu Arunagiri in third iwth 129. In the race, Rahil Pillarishetty (Sparks Racing) came in second followed by Arunagiri in third. Pillarishetty also won the next race on Sunday with Arunagiri in second. But Sathyanarayana Raju's third place finish was enough to help him finish at the top of the championship standings with 159 points. Arunagiri and Menon finished with 147 and 142 points.

The top-flight Super Sport 165cc class, Jagan Kumar and Ahamed Arif crashed out after making contact at Turn-1 on the third lap, both championship- hopefuls . Earlier in the second lap, pole-sitter Rajiv Sethu (Honda Ten10 Racing) lost ground due to a handlebar issue but managed to finish third. Team-mate Mathana Kumar finished second coming back from a fall two corners from the finish. Deepak Ravikumar (TVS Racing) took the win on the first day.

In the second race, Rajiv Sethu, Sarath Kumar and Mathana Kumar took the podium positions to make it a Honda Ten10 Racing lock out. But Jagan Kumar's (TVS Racing) seventh positon was enough for him to win the championship with 158 points, Rajiv Sethu and Mathana Kumar followed with 145 and 130 points. 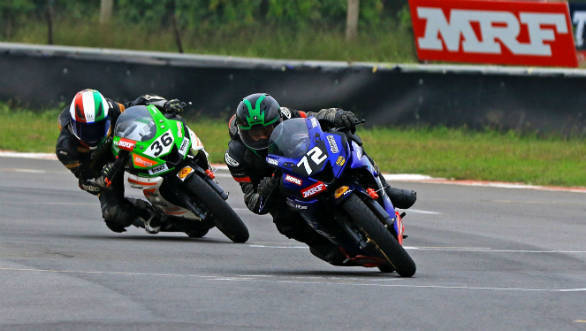 Karthik Mateti of Sparks Racing won his third of five races to be crowned champion in the Stock 165cc category with 111 points. This was far ahead of team-mate Aditya Rao Immaneni with 70 points. The youngest rider to score points this season was 13-year old Kavin Samar Quintal(Team RACR) who finished ninth in the championship.

In the CBR 250 Honda Talent Cup one-make championship, Abhishek Vasudev finished first with 171 points, Anish Damodar Shetty was in second with 165 points and Senthil Kumar was third with 140 points.