At the second Euro JK 18 race for Round 2 of the JK Tyre National Racing Championship 2018, Chennai's Ashwin Datta drew first blood in what is turning out to be a closely fought three-way battle for the title. 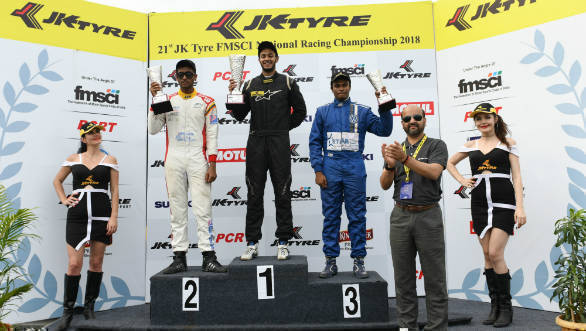 Datta was tied for the top spot with Nayan Chatterjee and Karthik Tharani, all with 43 points at the end of the third race for the weekend held today. The final race saw Bryan Perera win with Ashwin Datta come in second and Chatterjee third. Datta now leads with 50 points, followed by Chatterjee at 49 and Tharani at 48. 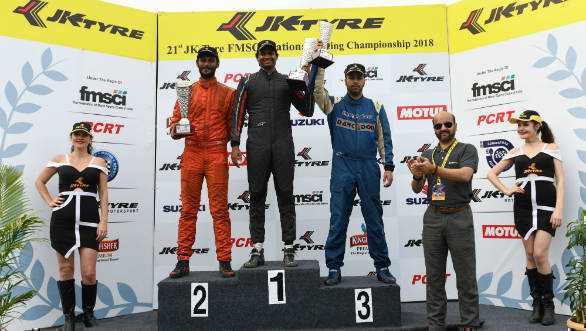 In the LGB Formula 4 category, MSport racing's Vishnu Prasad continued to be on top. In Race 3 held today, he started at seventh place with the reverse grid format, but worked his way up to the first quickly enough. The second race for today, Race 4, was hotly contested and Raghul Ramasamy finished first in that one, followed by Prasad and Rohit Khanna.

The newly introduced JK Tyre Novice Cup also had its share of incidents, but the 14-year-old Tijil Rao held his wits about him, winning the race after the safety car had to be called on. Ashwin Nair's penalty also helped Rao, who was followed by Huzaifa Tinwala and Yokeshwaran Krishnavelu.

Joseph Mathew continued his dominance over the Suzuki Gixxer Cup, making it four out of four this season. Syed Muzammil Ali and Malasawmdawnglama took the other two places on the podium in today's race. In the Redbull Road to Rookies event held alongside, Aizawl's Jerome Vanlalrengpuia posted the fastest times in over the two rounds. This earns him a spot on the Red Bull MotoGP Rookies Cup qualifiers next month in Spain.

The next round of the 2018 JK Tyre National Racing Championship will now be held between October 12 and 14 again at the Kari Motor Speedway.