The final day of Round 1 of the 2018 JK Tyre FMSCI National Racing Championship at Kari Motor Speedway continued the trend set on Saturday, with competitive racing across the categories.

Sri Lankan racer Bryan Perera dominated proceedings in the top-tier Euro JK 18 class. He won two out of three races held in this class on Sunday, July 8. Karthik Tharani also managed to carry on his good run from Saturday, winning the other Euro 18 race. Mumbai's Nayan Chatterjee and Chennai racer Ashwin Datta kept Bryan and Karthik honest, splitting second and third positions between themselves throughout the day. In fact, Ashwin Datta is now leading the championship with 24 points, Bryan and Karthik are behind him with 23 points each. The Formula LGB4 events stood out on Saturday thanks to the close racing they saw, and Sunday was no different. Rohit Khanna from Delhi and Chennai's Raghul Rangasamy won a race each. Vishnu Prasad, yesterday's race winner, and Kolhapur's Chittesh Mandody took the second and third places in both the races. A slight spell of rain caused the second race to start behind the safety car, but there were no major incidents. 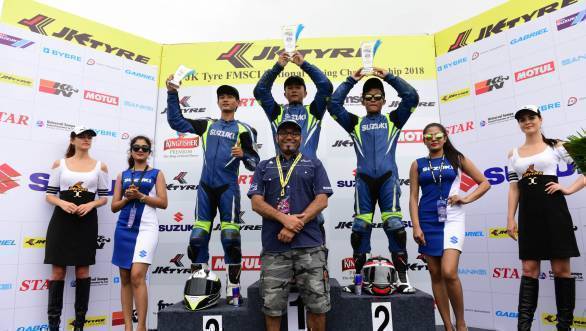 The last day of Round 1 was a lively event. The overcast skies did not play spoilsport for the most part and the close racing was accompanied by other attractions. The most notable was the stunt show put up by the Maruti Suzuki Baleno support cars, and a stunt riding group from Coimbatore.