The heavily refreshed Triumph Tiger 1200 was showcased first at the 2017 Milan Motor Show aka the EICMA and will get launched in India on May 11. As part of the update the bike gets a host of cosmetic and mechanical changes, but more importantly, Triumph has decided to do away with the Explorer suffix in the bike's name and simply call it the Tiger 1200. Until now Triumph has only been selling one variant of the Tiger 1200 (Explorer) in India, the mid-spec, off-road focused XCX version. At this point we are unsure as to whether or not more variants of the bike will be launched in India this time. That said, Triumph might just launch the mid-spec, road-biased XRX variant as well, in a bid to strengthen its position in the full-size adventure segment further. The Tiger 1200's 1,215cc, liquid-cooled, inline three cylinder engine produces 141PS  which Triumph claims is the highest in its class for a shaft-driven motorcycle  along with 122Nm. 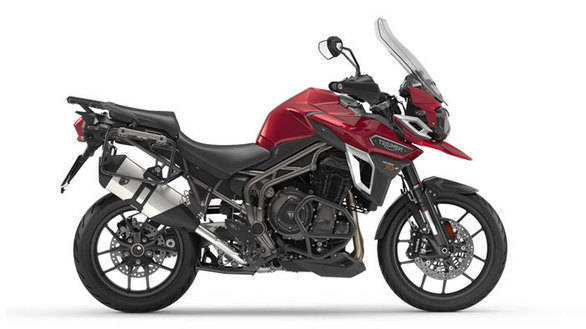 The 2018 Triumph Tiger 1200 drops the Explorer suffix, gets a host of cosmetic and mechanical updates and is lighter than before

Engine internals have been revised as well and the 2018 Triumph Tiger 1200 gets a lighter flywheel and crankshaft, a magnesium cam cover as also an Arrow exhaust as standard on higher variants. Depending on the variant in question, the Tiger 1200 is lighter by up to 11kg, which is welcome considering the Tiger Explorer's dry weight of 253kg. The Tiger 1200 also gets adaptive cornering lights, while several features from the 2018 Triumph Tiger 800 that was launched in the country recently have been carried over, including all-LED headlamps as also the multi-coloured, high resolution TFT display and illuminated switchgear. The 2018 Tiger 1200 also gets new riding modes and a hill-hold function to enhance its rideability further. Launching the XRX version should also help Triumph in offering the Tiger 1200 to prospective buyers at a lower price point, considering the XCX currently on sale retails at Rs 18.75 lakh ex-showroom.