The 2018 TVS Apache RTR 160 4V is the brand's second launch this year already, quick on the heels of the launch of the sporty and all-new Ntorq 125 scooter. The new generation Apache RTR 160 is a huge leap forward over its predecessor as this is the first comprehensive upgrade for the motorcycle since its launch over a decade ago. Styling is all-new and is very similar to the Apache RTR 200 4V, apart from which the engine and chassis have also received major updates this time. The engine employs the RTR 200's 4-valve technology. The new chassis has been developed working closely with TVS Racing and is in fact based on TVS Racing's 165cc race machine that has won several championships. The RTR 200's monoshock has also found its way onto the new generation RTR 160. Here's a full-fledged gallery of the new bike. 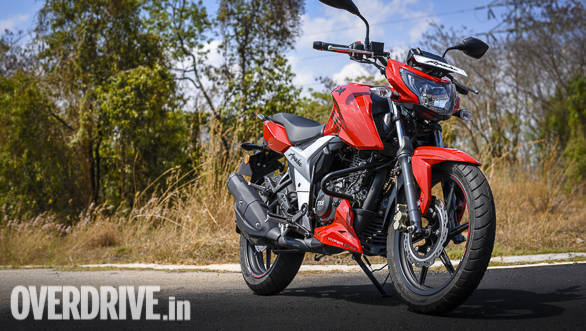 The 2018 TVS looks very similar to its elder sibling, the Apache RTR 200 4V. Both motorcycles are based on the Draken concept originally showcased at the Auto Expo and the new RTR 160's headlamp unit, fuel tank and exhaust look identical to the 200's 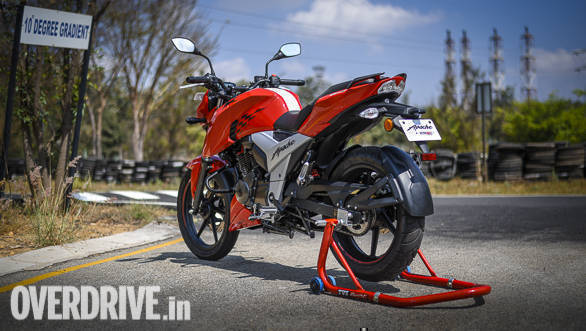 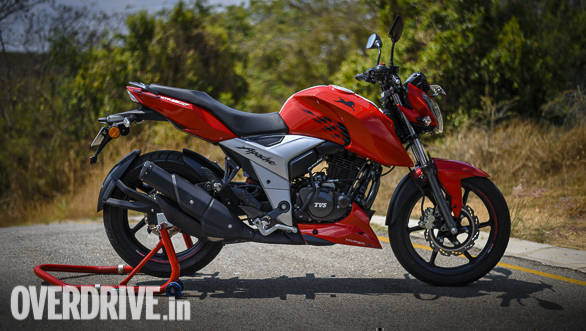 Adoption of a monoshock, on the 2018 TVS Apache RTR 160 4V, which again is straight off the RTR 200 has helped make for a cleaner look for the motorcycle, besides the fact that the monoshock helps improve the bike's handling significantly 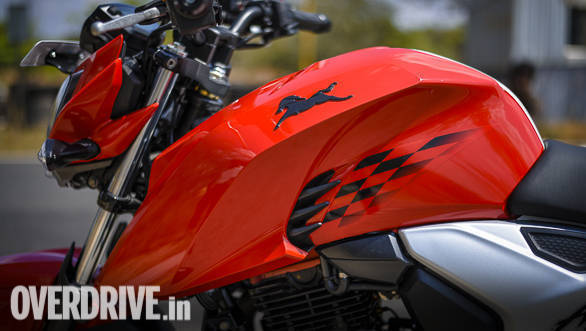 The prancing horse logo that we first saw on the Apache RR 310 has made its way onto the 2018 Apache RTR 160 4V as well. Also note the chequered flag graphics on the fuel tank 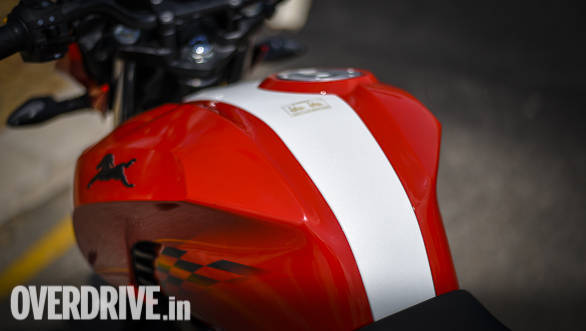 The fuel tank cap on the new TVS Apache RTR 160 is offset to the right, just like the RTR 200. The white stripe along the length of the tank looks nice. More importantly, fit-finish levels are excellent and very similar to the range-topping Apache RR 310 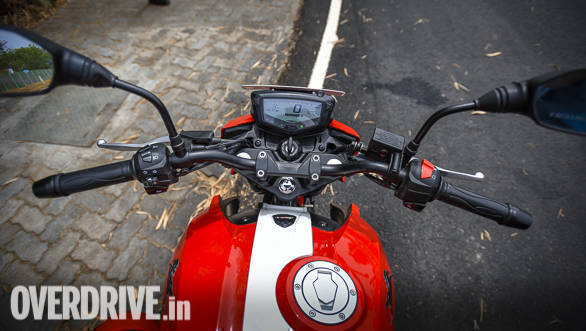 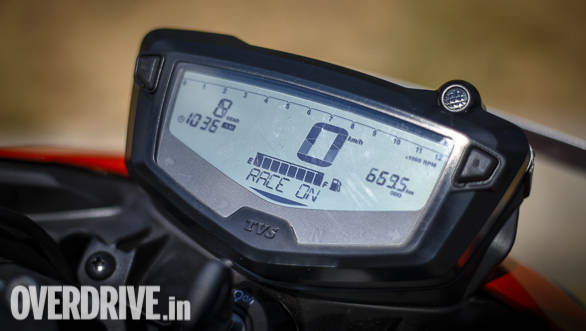 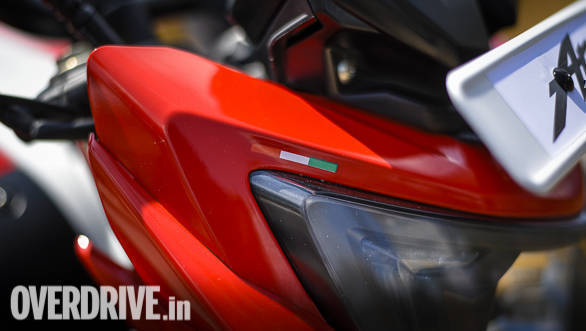 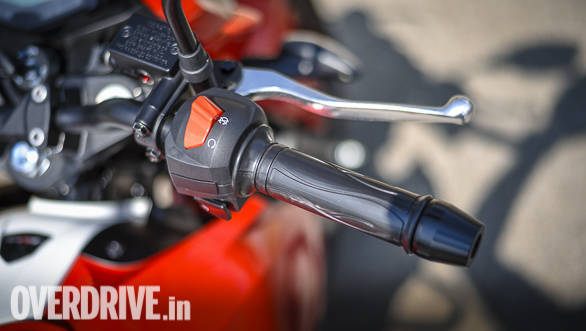 Quality of switchgear and plastics on the Apache RTR 160 is very premium, while the clutch and front brake levers get a buffed aluminium finish that is nice to the touch 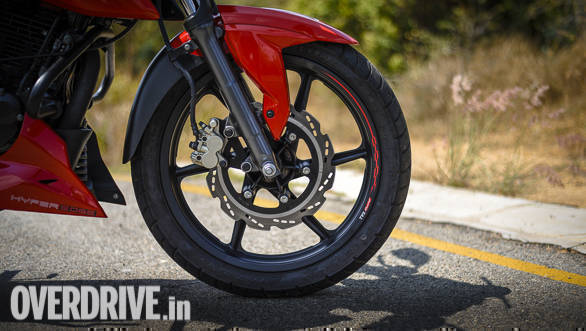 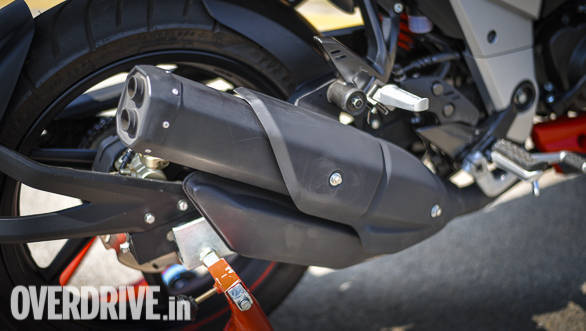 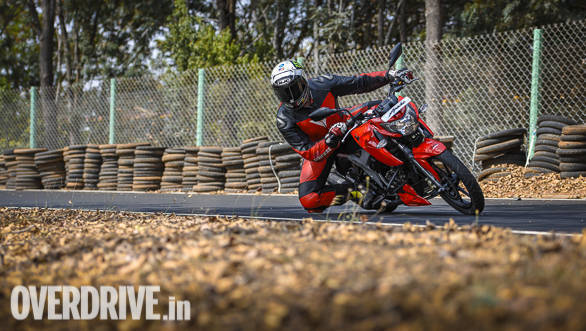 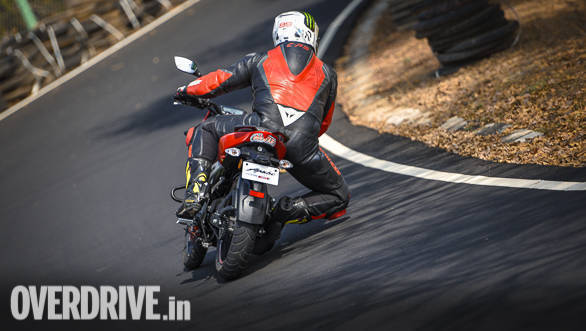 The 2018 Apache RTR 160 4V's chassis is inspired by TVS Motor's highly successful 165cc race bike that has won several national championships, which has helped the RTR 160 become quicker when entering corners thereby allowing you to carry higher speeds through the corner 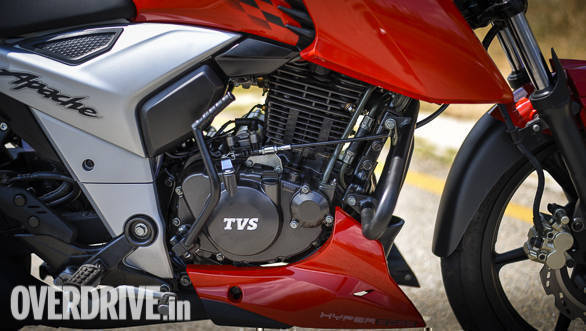 The 2018 TVS Apache RTR 160's engine receives major updates in the form of the Apache RTR 200 4V's 4-valve technology apart from benefitting from TVS Motor's expertise in making high performance race engines that are also high on reliability. Outputs for the RTR 160 stand at 16.8 PS (for the fuel injected version, carbureted version offers 16.5PS) and 14.8Nm now as compared to 15.12PS and 13.30Nm for the older bike. 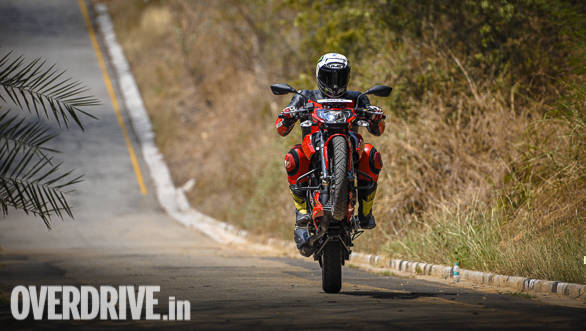 TVS Motor's RTR series of streetbikes have always been considered to be fun to ride machines and the 2018 Apache RTR 160 4V isn't any different in that sense with its strong bottom end performance, which means pulling wheelies is easy 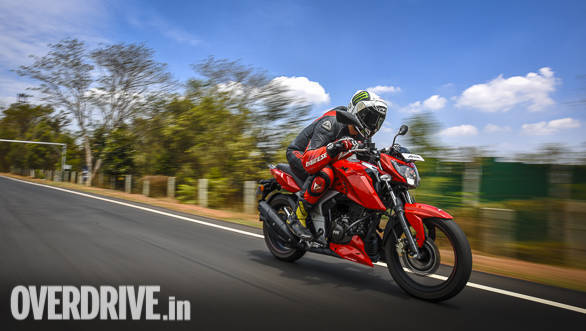 The 2018 TVS Apache RTR 160 feels stronger in terms of straightline acceleration thanks to its higher outputs and TVS Motor is claiming a 0-60kmph time of 4.73 seconds for the bike 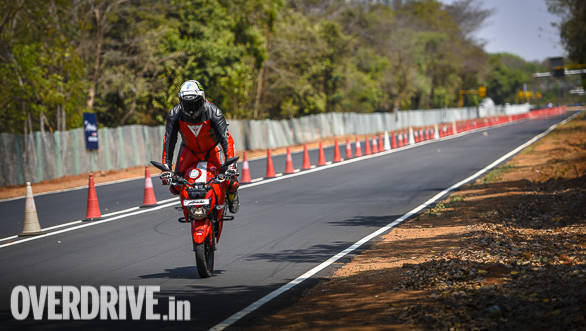 Just like its predecessor, the 2018 TVS Apache RTR 160 is a lot of fun for antics like these thanks to the progressive feel from its front brake