Audi India has unveiled its first fully-electric model, the Audi e-tron EV SUV in India. The company plans on launching this SUV here by the last quarter of 2019. While prices haven't been announced yet, we expect it to cost around Rs 1.2 crore, on-road. But if certain government subsidies become applicable by that time, this could drop to around Rs 95 lakh. 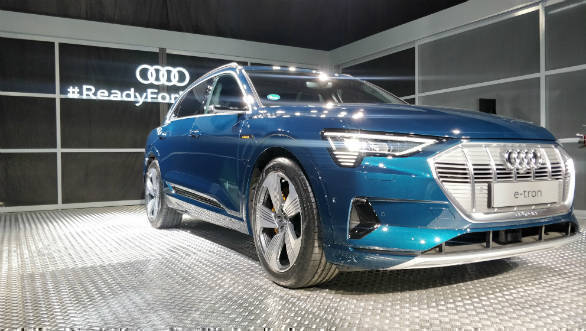 In terms of size, the Audi e-tron sits between the Audi Q5 and Q7 in the brand's line-up. It is based on the Volkswagen Group's MEB platfrom, which in this car's case, is a heavily reworked version of the MLB platform found underneath the Chinese-market Audi Q5 LWB. The e-tron's styling follows Audi's positioning of the e-tron as a typically Audi SUV that just happens to be electrically powered. There are unique touches at the front like the wider grille finished in silver and housing dynamic flaps for more aero-efficiency. Other unique bits are the more angular bumper with its triangular inserts and the sharply-cut LED headlamps. 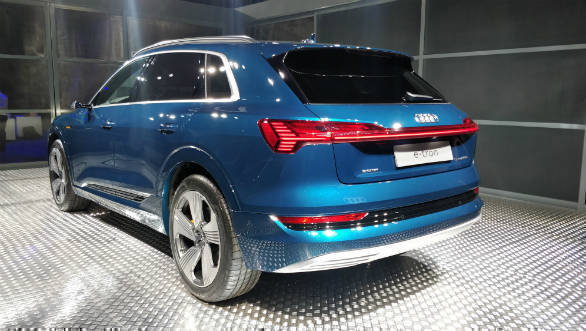 The side profile is dominated by the 20-inch contrasting-grey wheels, which again aid efficiency. These are shod with 255/50 size tyres. There's also the e-tron's party trick, the side-mounted cameras which replace traditional rear-view mirrors. These project their view on to quite a crisp OLED screen on the door-pads. The side-profile is generally what you found in traditionally powered Audis but gets a few flowing cuts above the wheel-arches, highlighting this car's superior performance. The rear again focuses on unique e-tron traits like the LED light bar that runs the entire width and the slimmer taillamps which widen with the LED light slits. The small aero-tweaks have combined to give the e-tron an impressive 0.27 Cd drag coefficient. 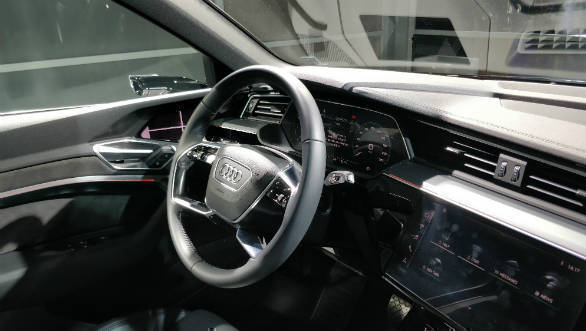 The interiors are exactly like any other new Audi SUV, in keeping with the brand's thinking with this model. The most striking touch is the centre console with its twin haptic screen set-up, which also debuts Audi's MMI2 interface for India. This section is angled towards the driver for more effect. Also new is the floating gear-selector and capacitive buttons in place of physical ones. The dashboard itself is more layered now with its sharper elements, as seen with the AC vents. The Audi Virtual Cockpit has been slightly reworked for this application too, and provides EV-specific data, while the steering wheel is quite a sporty leather-wrapped unit. The display car was a German-spec model and came with an all-black interior with suede trimmings, we expect this to change for India. Expect lighter shades and open-pore wood trim. In numbers, the SUV is 4,901mm long, 2,192mm wide and 1,629mm long. 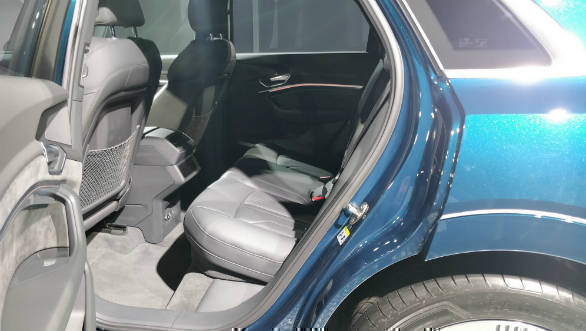 With the battery pack placed in the floor-pan, the e-tron makes great use of its 2,928mm wheelbase. Its got a flat floor for rear passengers and the dash has been pushed forward, freeing up masses of front legroom. Bootspace is 660 litres which goes upto 1,725 litres with the rear seats folded. The battery management unit and a compartment for storing cables take up space underneath the bonnet. There will also be an extensive feature list when the car goes on sale. Expect ambient lighting, four-zone climate control, wireless charging, navigation, a Bang and Olufsen sound system, adaptive air suspension, 360-degree cameras and a panoramic sunroof. The trick rear-view cameras will be an optional extra.

As for safety, expect many airbags, traction control, stabilty control, torque-vectoing, hill-descent, etc. But Audi is unlikely to bring in the latest in assistance and guidance systems. 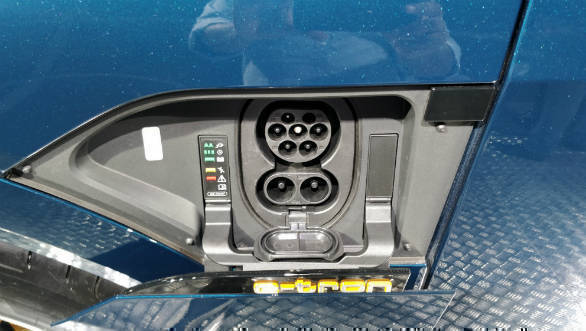 About the drivetrain and charging

The e-tron comes in one drivetrain option, the 55 quattro, which houses a liquid-cooled 95 kWh lithium-ion battery between the two axles. This powers two electric motors, one on each axle, for a combined output of 265 kW and 561 Nm, and AWD capabilities.  This lets the electric SUV get from zero to 100 kmph in 6.6s and on to a 200 kmph top-speed. A boost function is available which increases outputs to 300 kW and 664 Nm, and drops the acceleration time to 5.7s. Three levels of recuperation are available, accessed via the paddle shifters, and these can recover upto 30 percent of the energy spent. Further, these also assist in deceleration. 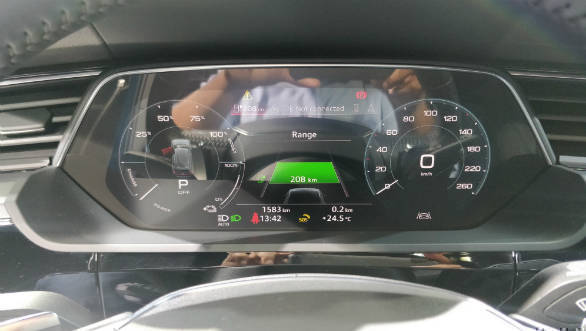 This set-up gives its a 400 km range. Aside from the usual drive modes available in other Audis, a special 'Range' mode is available via the drive select which shuts down auxiliary energy-consuming functions to eck out the most distance. The e-tron can be charged in three ways. The first is using a regular 11 kWh hour AC charger which takes  8.5 hours. An optional 22 kWh fast charger will also be an option for customer, which tops up the car in 4.5 hours. Further, the e-tron can also be charged using a 150 kWh AC fast charger, which gives 80 percent range in 30 minutes. Audi India will set up the chargers in owners houses when they buy the e-tron. The firm thinks that a full charge should suffice for week-long city-usage. For long-distance trips, the company is setting up fast-charging stations at its dealership across the country. Further, the company is also working on an India-specific warranty and service package for its customers.

Audi India is bringing in the e-tron as a CBU under the new rule that allows 2,500 units to be directly imported by a manufacturer. It expects to sell around 200 of these SUVs here and order books have already started filling up. This is the first model in a new product offensive by Audi India which focusses on petrols, hybrids and electric vehicles. The company will launch the Q8 SUV, the A8 sedan and the facelifted R8 supercar here in the next few months.

Read our review of the e-tron here

Watch the video review below