The 2019 JK Tyre FMSCI Indian National Racing Championship kept its thrill quotient intact for its second round, held between Aug 30 and Sept 1 at the Kari Motor Speedway in Coimbatore. The source of most of the action was from the Formula LGB-4 class. This class has many former champions in contention and has always been a source of close battles. 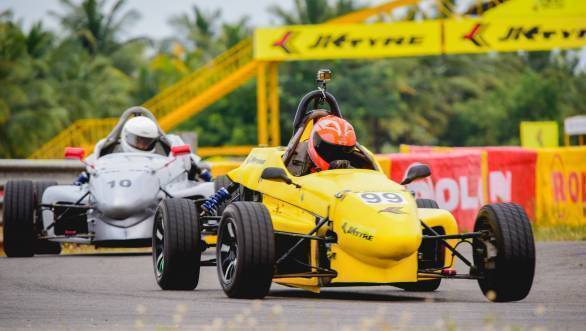 Sohil Shah of Msport started off the weekend with a win in Saturday's race. But on Sunday, September 1, Diljith TS took an impressive win. He started from P7 owing to the reverse grid but steadily moved up the order to the top spot. Raghul Rangasamy started from P5 but got caught up in the scuffle for the top spots, missing a win. He remedied this in the second race of the day, where he won from a similar situation. This and his fourth-place finish on Saturday got him 47 points and to the top of the leaderboard, overtaking team-mate Vishnu Prasad. Prasad had a tough weekend, ending with 45 points and Diljith was third with 31.

Pune's Tanay Gaikwad, scored the full 20 points in the Gixxer Cup races this weekend. He won both races and tied with Syed Muzammil at the top of the standings, who was less than a secnd behind in the secnd event.

In the other categories, Mumbai's Aaroh Ravindra scored 28 points this round to stay on top of the JK Tyre Novice Cup, taking his tally to 52. Chirag Ghorpade was second with 39 points. Mira Erda continued her great run in the women's category with her sixth straight win. David Ryan continued to hold ground in the  JK Tyre Inter-College Cup and Ikshan Shanbag (Satara) won both the JK Tyre Redbull Road to Rookies events.