The second day of racing at the 2019 MRF MMSC FMSCI National Car Racing Championship, at the Kari Motor Speedway, lived up to the exciting theme of the first day. Highlighted by Karthik Tharani and Jeet Jhabakh's successes. 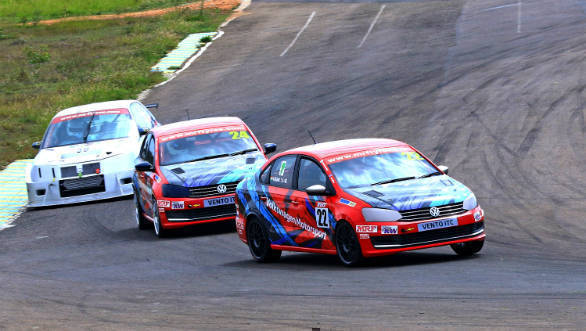 Karthik Tharani (No.22), who scored a double in the Indian Touring Cars category

Tharani came out on top in both the ITC races. This in spite of the 30 kg success ballast that he was carrying, as per another rule change for this year (second and third placed finishers need to carry 20kg and 15 kg). His Volkswagen Motorsport India team-mates Dhruv Mohite and Ishaan Dodhiwala followed in that order for the first event.

Arjun Balu in his Race Concepts Honda City continued to keep the Ventos honest. After some glitches with his still-in-development car in the first race led him to end at fifth , he finished a very convincing third in the second race. Tharani and Mohite were first and second here, after Dodhiwala crashed out while fending off Balu. 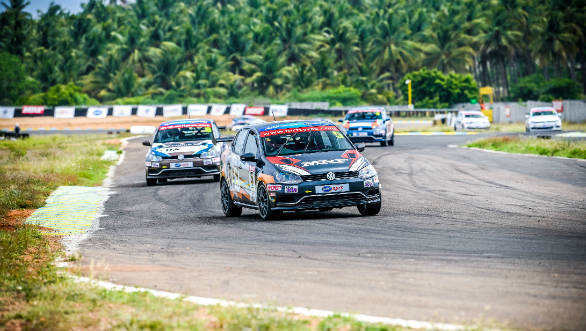 Unsurprisingly, there was more variety at the podium for the two Ameo Class races that were held today. The top-eight reverse-grid start allowed the two Bangladeshi rookies, Avik Anwar and Aiman Sadat, to finish first and second, ahead of Anmol Singh Sahil.

The starting order for the second Ameo race was decided by the the driver's second best qualifying times. This put the front-runners back on top, and they made full use of this with Jeet Jhabakh, Sahil and Prateek Sonawane taking the top three spots.

Volkswagen Motorsport is emphasising clean racing this year. The additional training to drivers in this regard showed on track, with both races running very smoothly and without incident. 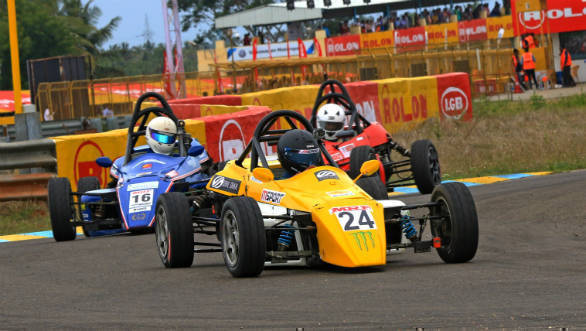 The Formula LGB 1300 classifications had three races, one of which was the the race that had been washed-out on Saturday. Sohil Shah of MSport won the first and third race, Viswas Vijayaraj won the second. Ashwin Datta finished second in all three races while Kunal Maini, Shah and Chirag Ghorpade took third.