With the unveiling of the 2020 Hyundai Aura, we can see that the production car is quite close in its design cues to the sketches released by Hyundai days before the wraps came off. The Aura will be launched in early 2020 with a range of BSVI-compliant engines, including the 1.2-litre petrol and diesel engines, and a detuned 1-litre turbo petrol engine. 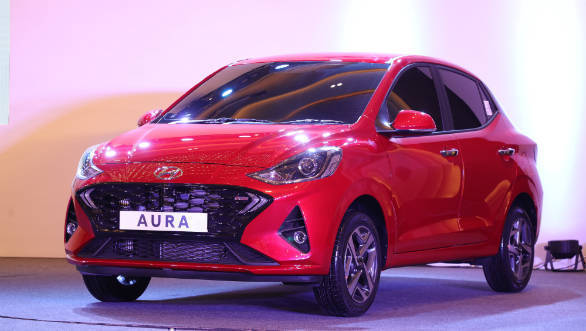 While at first glance, the Aura appears similar to the Grand i10 Nios with which it shares a majority of its bodywork, tweaks to the grille and front bumper set the Aura apart. Hyundai's cascading grille itself is now a two-piece design, finished in piano black, with a honeycomb insert at the top and a finer weave for the lower grille. Twin boomerang LED daytime running lights are also a differentiator. The fog lamp inserts themselves have been reprofiled, as is the lower edge of the front bumper. The overall look is a touch more sporty than the already aggressive fascia of the Grand i10 Nios. 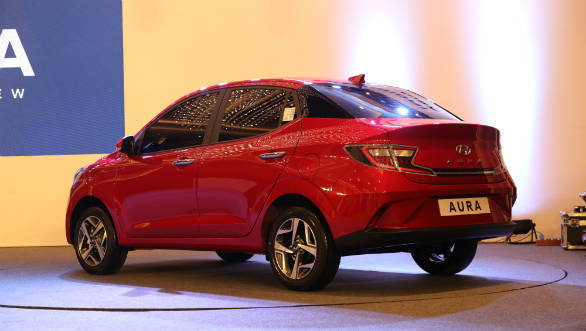 More importantly, in becoming a compact sedan, the Aura's dimensions stand at 3,995x1,680x1,520mm (LxWxH) with a coupe-like roofline helping blend the boot in. As seen on the design sketches, the blacked-out C-pillar goes a long way towards helping the illusion, though with the dark tints applied on this display car, the C-pillar blends in a little too easily with the rear windshield. We would expect a body-coloured C-pillar to help the profile separation better than the current piano-black finish. The boot, with its upturned decklid, gives the impression of a spoiler, below which the wide LED taillights sit. There's a lot of detail in the rear section of the Aura, with a chrome lining around the tail lights helping them stand out, and a thin strip of piano black trim overlaid with chrome helps up the bling appeal. The rear bumper houses the number plate, and has deep recesses for the reflectors, making for a sporty look. 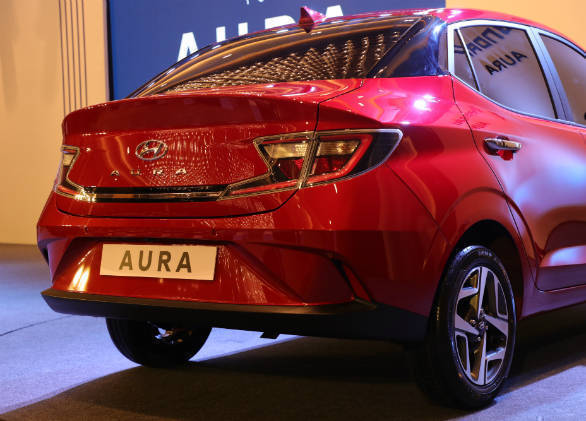 The powertrain details revealed show that the 1.2-litre petrol as on the Grand i10 Nios continues in its same spec, with 83PS and 113Nm of torque. The 1.2-litre U2 diesel has been upgraded to be BSVI compliant with the addition of a Lean NOx Trap (LNT) and power figures are the same at 75PS and 190Nm. Importantly, the 1-litre turbo petrol from the Venue is detuned to 100PS, while the torque output remains unchanged at 172Nm. Both the 1.2-litre engines, petrol and diesel, will get an option of a 5-speed AMT, while the 1-litre turbo will come with a 5-speed manual transmission only. 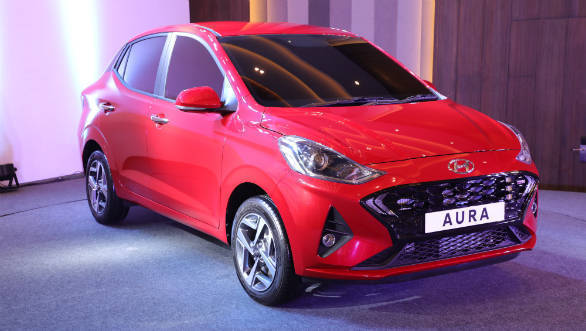 Hyundai has not shown us the interiors of the Aura as yet, though we expect a largely similar cabin to the Grand i10 Nios, with new colour schemes for the upholstery and cabin to be the differentiators. As far as features go, the same feature set from the Nios will be carried forward, and the Aura will not offer BlueLink connected tech.