TVS, as chairman Venu Srinivasan said at the launch of the Scooty Zest, started out as a moped company. Its humble mopeds have been bringing home the bread for TVS for ages now. However, as India has evolved, the role of the moped in our daily lives has seen an unprecedented erosion. Today they're two-wheelers that show little or no growth and are largely ignored by investment analysts, sales volume trackers and us motoring journalists alike. Perhaps we are blind to something that's happening quietly behind the scenes.

TVS recently crossed a spectacular milestone. They have now sold, we understand, over one crore mopeds - an official announcement is expected soon. That's 1,00,00,000 (or if the zeroes bug you, 10 million) mopeds since the journey started. That's a significant number. They're also the only manufacturer still operating in that segment. Their traditional markets have been Tamil Nadu, Andhra Pradesh and Karnataka. But when a drought situation in Tamil Nadu caused a fall in moped sales recently, stability came from the Uttar Pradesh market. Yes, UP in the north of India. It seem TVS' efforts in expanding reach and marketing in the northern state suddenly saw a spurt in moped sales that meant that the TN sales dip was reduced to a minor blip in the sales curve overall. 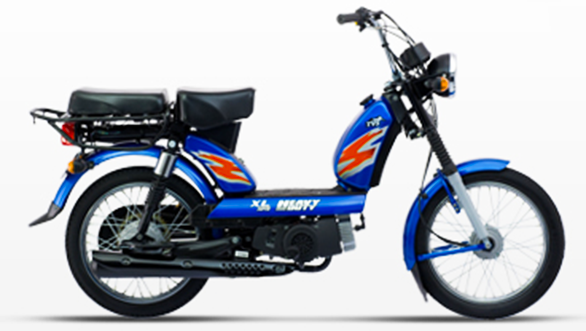 Now consider this against the backdrop of the products available in India. When was the last time you read about a new moped. Or an updated moped. Or a facelift. Anything? Sales have been steady despite the old products. Sales have remained impervious to the growth in the scooter sales and to the up and down movement of motorcycles. If sales can be this stable without needing product innovation and marketing then it stands to reason that if a company were to put effort into these two areas, they should be ably rewarded with sales growth. On the other hand, TVS' experience with stepthrough development has been growing thanks to the bebeks (Indonesian name for stepthroughs) like the Neo family that it sells in South East Asian markets. The only downside I can see is that customers at the bottom of the Indian two-wheeler pyramid also happen to be the most conservative of the the whole lot. Which means if TVS is working on updates to the XL line, they'll have to step carefully and take small steps that add up rather than giant leaps that scare people off.

So consider the situation. First, moped markets are stable without any movement on the product front. Second, efforts to expand reach and activation in a state not known for its moped affection has produced a positive result. Third, TVS is sitting not only on an impeccable reputation for products and reliability in the segment, but it also has products in the same role but in more advanced form in both technology and role in their export operations. Fourth, with the rotary gearbox in the Jive etc, TVS already has the technology it needs to make a moped work. Fifth, while the emissions norms deadlines have been backed off reducing pressure on TVS to update the mopeds, there had to have been a plan to update them in any case. Now the deadline has been eliminated but the plan should still continue to lead to a new line of mopeds.

I would say that this is pretty strong (circumstantial) evidence that TVS is working on a rejuvenation of their moped products. The company has not offered any comment. We believe we will see new stepthrough products from TVS in the not too distant future. Whether these are replacements for the humble workhorses like the XL series or take the form of more premium products that allow moped customers to upgrade their ability to carry loads/people is a question that there is no answer to right now.

The moped story is lost in the maelstrom of the upcoming Victor which is a massive brand name at TVS and a critical motorcycle segment launch. Swamped by the new Scooty Zest, which is another heavyweight brand name that's just arrived in another segment experiencing rapid growth (Click here to read more about the Scooty Zest 110).

But we believe that TVS has the opportunity to capitalise on a segment it literally owns right now. A segment that's been ignored but seems to have the potential for significant growth thanks to decades of slow movement. The mopeds are very important for the company when it comes to its quest to attain and then retain number three position in the Indian market behind Hero and Honda. What we believe we will see are the first product updates to the TVS moped line since nearly a decade or more. The new mopeds will be frugal, spartan, rugged workhorses like the current ones. The TVS website only lists the XL Heavy Duty which is powered by a 70cc two-stroke that makes 3.5PS. I would expect that the new one would be a four-stroke and might even have a 100cc four-stroke engine n a very mild state of tune to offer exceptional pulling power and economy along with excellent reliability. I believe there may also be a small but commercially viable space for a more premium offering but if it does come, it will follow the bread and butter models in the market.