The season-opening Volkswagen Polo R Cup race came with the promise of considerable action. The racer on pole was Karthik Tharani, the 20 year old with one season of the Polo Cup already under his belt. And given that of the 19 drivers competing this year, seven have prior experience in the Polo Cup, there was no question about the fact that Tharani would be given a run for his money over the course of the race. 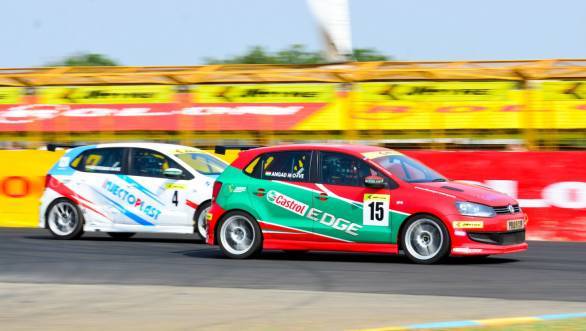 As things turned out there was plenty of action over the course of the first lap itself. When the five red lights went out, a fast-starting Angad Singh Matharoo catapulted himself from ninth on the grid into second place. Karthik Tharani and Anshul Shah collided with each other, with the front bumper of Karthik's car being ripped out. On the same lap, Venkatesh Shreyas and Prabhanjan also had a collision that blocked the track and called for a frantically waved red flag that brought an end to the proceedings. While Anshul and Karthik both went into the pits, it was only the former who made it back out, with the damage on Karthik's car being too exhaustive for repairs.

The race was restarted as per qualifying order, which effectively put Lee Keshav on pole, given that Tharani was not restarting the race. It was another terrific start from Angad Singh Matharoo who rocketed up the grid and slotted into Number 3 on the first lap. Ahead of him were Lee Keshav and Anshul. While Anshul and Lee tangled between turns C2 and C3, it was the latter who lost out and got punted down to fourth place. Anshul took the race lead, while Karminder Singh who had worked his way into second, overtook to take the lead from him. The battle behind Karminder continued with Matharoo taking second from Shah. Which is the order they finished in on track. However, given that Singh was later found to have overtaken under yellow flags, he was given a 30 second penalty that put him down in 10th place. Angad was given the race win, while Anshul Shah came second and Lee Keshav third.