The second round of the 2015 Asia Pacific Rally Championship at New Caledonia was won by Team MRF Skoda driver and 2013 APRC title winner Gaurav Gill (co-driven by Glenn MacNeall). Gill had an overnight lead of 1min 56.1sec, which he converted into a win on the final day of the rally. He ultimately won the event by 39.6sec over his team-mate Pontus Tidemand (co-driven by Emil Axelsson). 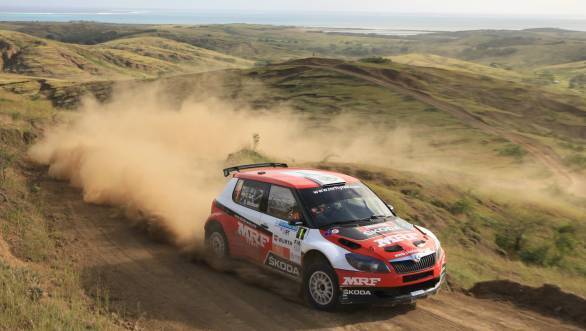 Gill is currently second in the 2015 APRC standings

It wasn't all easy going for Gill though with Tidemand winning all seven stages on Sunday. This allowed him to catch up to Gill. However, it wasn't enough to catch him and take the win. Third place in the rally went to local driver Jean-Louis Leyraud (co-driven by Scott Beckwith).

This is Gill's third win at New Caledonia since he began competing in the APRC in 2007.

"Right from the start of the day our plan was to eliminate any risk and keep Pontus in sight. The stages were very difficult and extremely slippery. It was easy to make mistakes and lose the rally. We had a lot of pace left in the car, but chose to cut back and aim for an overall win. After the initial problems before the shakedown, it turned out to be a perfect weekend for us," said Gill.

Tidemand currently leads the APRC standings with 70 points, three points ahead of Gill.