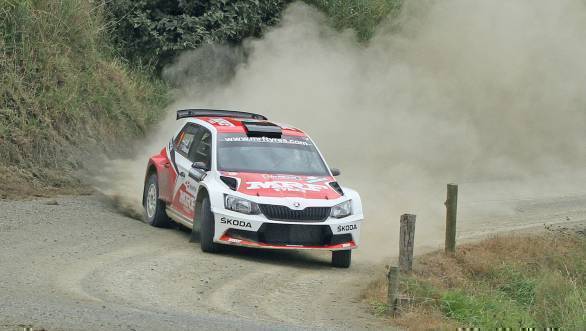 Gaurav Gill and co-driver Glenn Macneall won the first round of the 2016 Asia Pacific Rally Championship, Rally Whangarei in New Zealand. The fact that Gill's new team-mate for the 2016 season, Fabian Kreim finished second, meant that Team MRF Skoda had a one-two finish. The victory was also Gill's ninth win in the Asia Pacific Rally Championship, and his second win in New Zealand, having won there last in 2014.

It was a tough win for Gill though, who had to give up a 41 second lead on the Saturday of the rally, due to a punctured tyre. This meant the overnight leader at the rally was Kreim, although it was a lead of only 4.6s over his more experienced team-mate.

On Sunday, Gill managed to overcome this timing deficit despite issues that cropped with the turbo in his Fabia R5. The part was replaced during the service break, following which Gill managed to maintain his lead over team-mate Kreim (co-driven by Frank Christian). 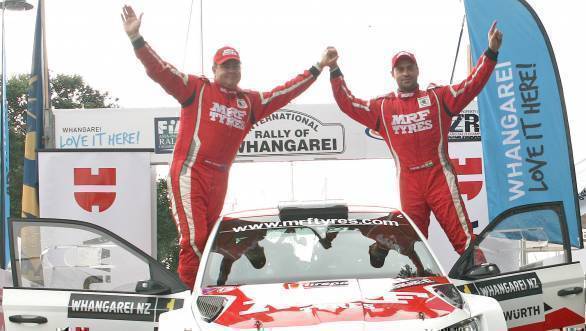 Gill and Macneall celebrate their win in New Zealand

"Obviously, I am extremely happy that I won today. Every win is special and today, after overcoming the overnight deficit, I opened a sizeable lead over Fabian and thereafter, my intention was to nurse it to the finish. The weather also changed overnight and we had to cope with it," said Gill.

"We had problems with the turbo with a leaking actuator that we replaced during service after the first loop, but with hardly a minute to spare. Thus, we were very much down on power during the first loop. However, I made 20 seconds on Fabian after repairs before deciding to ease off and drive to his pace rather than push as I had enough lead to win. My aim was to finish the event straining the car or the engine," Gill continued.

"Overall, I drove about 80-85 per cent to my potential since I am learning the new car and get the set-up right as it was prepared for Rally of Finland. From now on, I have to be consistent and keep scoring points," said Gill.

A delighted Lane Heenan of Race Torque said: "Since this was the first round, it was important that both our cars finished. Considering that Gaurav was driving the R5 for the first time, it was a pretty good result for him. The rains also helped as it afforded more grip."