Gaurav Gill outdistanced his MRF Skoda teammate Jan Kopecky to win the Malaysian Rally, fifth round of the FIA Asia Pacific championship, finishing over eleven minutes ahead of his nearest rival, Yuya Sumiyama and thirteen in front of nearest APRC challenger, Mark Pedder. After Gill had stopped on a stage to clear grass away from the front of the car, Kopecky had been over a minute in front of Gill but he damaged the suspension on stage six and lost a wheel. Under APRC rules, Kopecky was not able to qualify as a finisher but could score supplemental points for day positions. This enabled him to continue in the lead of the APRC, now reduced from a 39 point advantage down to eight points.

Even before the start there was drama   Shortly after the start of the short shakedown stage there was a huge storm and there were only four runs in the dry. Gill was 0.2 seconds faster than Kopecky but times were completely unrepresentative after that. Kopecky was 1.1 second faster on the slippery night time opening stage and the next morning he pulled ahead steadily through Day 1. Takale rolled on the opening stage, Gill had a spin and the Chinese Skoda driver Jun Xu after losing time on the superspecial with the wrong tyres for the mud, lost his brakes and impacted a tree. On Day 2 Gill continue to pull far in front, at one time gaining a minute a stage over Sumiyama. 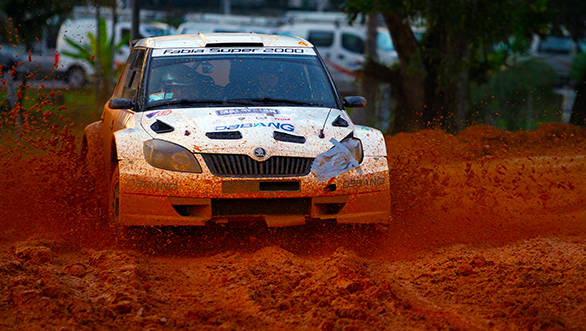 Jun Xu, after losing time on the superspecial with the wrong tyres for the mud, lost his brakes and impacted a tree

Top two wheel drive car was the Renault Clio R3 of the Indonesian former WRC driver Subhan Aksa ahead of Michael Young's Proton Satria Neo. Kohei Izumo had a heavy accident onstage 2 in his Suzuki Ignis. The rally was based at Johor Bahr, close to Singapore. Three APRC rounds are remaining, to be held in Japan, China and Thailand. 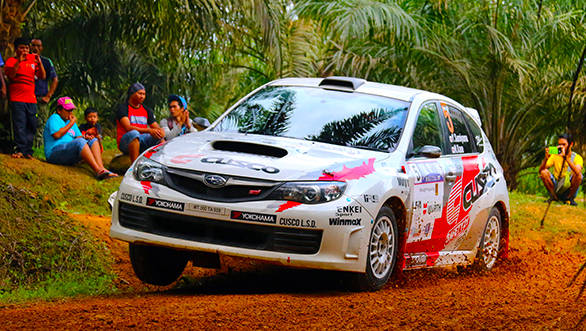