Arjun Maini is all set to make his Formula 3 debut and he's going to be competing for a team of considerable repute that too. The 17-year old Bangalore-based racer has been signed on by Van Amersfoot Racing, the same team for which Max Verstappen competed in the 2014 season. In fact, so impressive was Verstappen that he was snapped up by Scuderia Toro Rosso for the 2015 season of Formula 1, making him the youngest driver ever in the history of the sport. For Maini to snag a seat with the very same F3 team, then, is quite a coup. 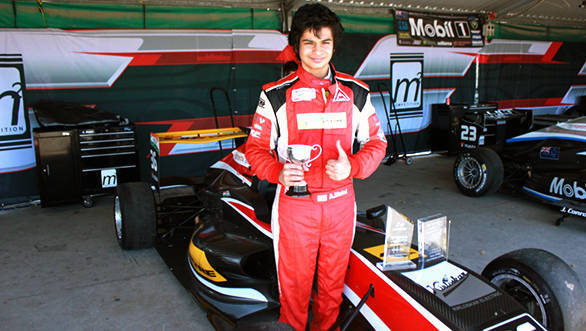 Van Amersfoot Racing has apparently been impressed by Maini's times in testing as well as his performance in the Toyota Racing Series in New Zealand, which is why they have signed him on as one of their three drivers. The other drivers competing for the team are Alessio Lorandi, Maini's former karting team-mate, and French driver Charles Leclerc. It will be the debut Formula 3 season for all drivers competing in the team.

''I'm quite excited to join such an experienced team,'' is what Arjun had to say about this new step in his Formula racing career. ''Obviously the team is very good and has the experience to give us an opportunity to do well,'' he continued. Arjun also stated that he is hoping to get a solid foundation and learn as much as he can in his rookie season in the series.

The Van Amersfoot team might have only risen to prominence in 2014, thanks to a particularly strong showing from Max Verstappen, but the team was founded in 1975, and has in fact been a stepping stone for a few drivers who made it to Formula 1, with Jos Verstappen and Christijan Albers being the most prominent names.

The 11-round FIA European F3 championship starts at Silverstone, Great Britain, on April 12,  concluding at Hockenheim, Germany on October 18.