Armaan Ebrahim and Anindith Reddy will compete in the 2018 Lamborghini Blancpain Super Trofeo Asia series with team Team Top Speed. The duo are expected to compete in the first half of the championship, which includes rounds at Sepang, Buriram and Suzuka. At the time of writing this story, the duo had already started their campaign, having just made it to Sepang in time for the championship to begin. 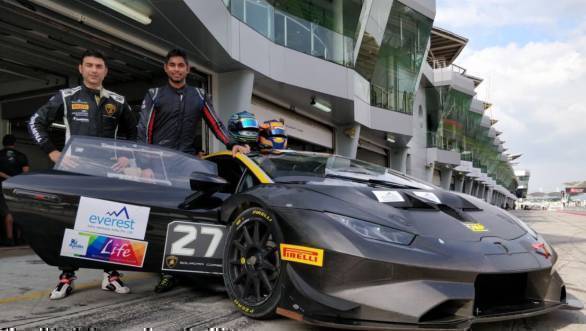 Ebrahim and Reddy are hoping to confirm their participation in the rest of the championship too, but are still to work out details of whether or not they will be able to compete in the rounds at Fuji, Shanghai and Vallelunga.

Ebrahim is an old hand as far as the Super Trofeo Asia championship goes, having already competed in the series in 2015, when him and team-mate Dilantha Malagamuwa finished second in their category, with the duo taking home the championship title in their class in 2016. In 2017, Ebrahim returned to the championship with FFF Racing, partnering Jack Bartholomew.

Anindith Reddy, who was recently crowned FMSCI's Motorsport Person of the Year 2017 after winning both the MRF 1600 championship as well as the Euro JK 17 Series, will be making his debut in the Super Trofeo Asia championship this year.