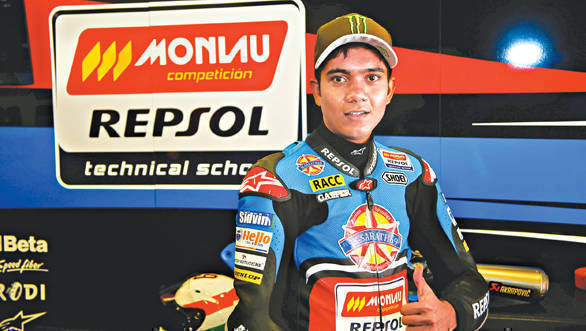 Sarath Kumar is all set to make his debut in the 2016 FIM Asia Road Racing Championship SuperSports 600cc class. The 23-year old Chennai-based rider, who has competed in the Asia Dream Cup in the past, will make his 600cc debut at the second round of the championship to be held at the Chang International Circuit in Buriram, Thailand between May 7 and 9, 2016. He will also compete in the subsequent four rounds of the championship, despite having missed out on the season opener. Sarath's team-mates at Team T.Pro Yuzy Honda NTS Racing are Tomoyoshi Koyama and Taiga Hada, both Japanese racers with plenty of skill and experience.

Sarath's move to the 600cc class comes after four years of riding smaller motorcycles, while he struggled to find the budget to move to a higher class of international racing. The fact that the WOW Digit Company, a Hong Kong-based investment and financial planning company stepped in, along with help from HM Japan, means that he has finally able to get the sort of support needed for him to snag a race seat. And it comes at the right time too - Sarath spent the last two years competing in the Asia Dream Cup, where he managed to finish ninth in 2014 and a far from ideal 15th in 2015.

"This is a perfect time for me to move from 250 class to the 600 class and I am so happy that I will be representing India in ARRC SS600. I have been riding the smaller bikes for over eight years and because of my physique I had to move up the cc class, but I did not expect the opportunity to come so soon, that to at such a high level of competition," is what Sarath said of his new racing venture. He continued to say that having a team-mate like Koyoma will push him to learn and also adapt to the motorcycle as soon as possible.

"ARRC SS600 is one of the toughest grids in the world and I want to learn a lot this year before I start thinking about results," continued Sarath. He went on to  thank Honda Motorcycles & Scooters India, HM Japan, as well as his sponsors John Sudheer of the WOW Digit Company and Ramji Govindarajan of Ten10 Racing.

For Sarath, 2016 is definitely the make or break year. He will have to prove himself, adapt to the motorcycle quickly, and also manage some good results and impressive performances, if he's going to land a seat for 2017 as well. We will keep you posted on exactly how he does. Watch this space.